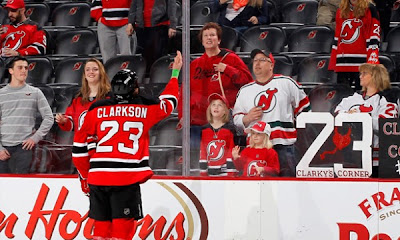 With training camp set to get underway in a couple of weeks, I felt the time was right to take a look back at the rookie GM's work from a player personnel standpoint. It's pretty tough to judge whether a move was good or bad before the puck has been dropped on the season but in my mind, the following five "moves" should benefit this organization for years to come.

It's kind of funny how things tend to workout. With the all the moves MacTavish made during the off season, it was the free agent he failed to have sign on the dotted line that will have the biggest impact on his this club moving forward. There is no question that David Clarkson was the perfect fit for the Edmonton Oilers.

The former New Jersey Devils winger was exactly what the doctor ordered. While not an overly big man, Clarkson plays a rugged style of game and has shown the ability to put the puck in the net. That said, the twenty-nine year old had scored more than seventeen goals on just one occasion, potting 30 during the 2011-12 campaign, though he did find the back of the net fifteen time in 2013.

While a number of teams were trying to sign this year's "big fish" on the free agent market, it ultimately came down to two teams. The Oilers and the Toronto Maple Leafs. Luckily, the lure of playing in his hometown was too much for him and his family to pass up. He agreed to a seven year pact, that will see him earn just under $36.8 million over the length of the deal.

Obviously, those numbers are rather staggering for a guy who has accomplished as little as Clarkson has during his NHL career but the scary thing is, Edmonton's offer was apparently better. As it stands, the signing will end up costing the Leafs $5.25 million in cap space over the next seven years. Not exactly sure how that number would have worked for the Oilers, nevermind a higher one.

This franchise has gone down this road before, via free agency and trade, and thankfully none of them worked out in the end. Be it their attempts to try and sign Marian Hossa and Michael Nylander to long term deals or the failed Dany Heatley Trade, all three were moves the organization should have never entertained making. One would have thought they would have learnt their lesson.

In the long run, this team will go as far as the likes of Jordan Eberle, Taylor Hall, Oscar Klefbom, Ryan Nugent-Hopkins, Darnell Nurse, Justin Schultz and Nail Yakupov take them. Unfortunately, there is no short term fix that will speed up that process. Craig MacTavish came awfully close to putting that in jeopardy in his pursuit of David Clarkson. Hopefully the fourth time is the charm and it keeps the Oilers from continually chasing after the "sexy" option...no matter the cost.

While the absurd free agent pitch to David Clarkson almost cost the Oilers, MacT hit it out of the park in inking Ference to a 4 year/$13 million deal. Yes the deal is probably a year too long but that is the price you pay when you dip into free agency. The former Boston Bruins rearguard will be an absolute godsend for what was arguably one of the worst backend's in the entire National Hockey League.

At thirty-four year's of age, Ference is undoubtedly heading into the final stage of his career but he continues to be one of the finest conditioned athletes in the league and has played a major role on a Bruins side that has reached two of the last three Stanley Cup Finals. He will help fill the leadership void created with the departure of Shawn Horcoff and play a big part in further developing the games of Jeff Petry, Schultz and most likely Oscar Klefbom.

The Oilers are still lacking a true top pairing blueliner but the addition of Ference, gives them four legitimate guys on the backend. The former eighth round pick of the Pittsburgh Penguins should allow Eakins to lighten the load on the trio of Petry, Schultz and Smid, while helping create far better balance on all three D pairings.

If over the next three years, Andrew Ference can simply deliver the type of game Andrew Ference has typically delivered over the course of his career, Craig MacTavish will look like an absolute genius for making this signing.

The temptation to trade the seventh overall pick on draft day was obviously there, hello Cory Schneider, but at the end of the day, the Edmonton Oilers did the right thing and made their selection at the 2013 NHL Entry Draft. When it came time to make the pick, Stu MacGregor and company had to decide between two names: Valeri Nichuskin and Darnell Nurse.

The big Russian would add some much needed size and even more skill inside the Oilers top six, whereas Nurse would be a bit a project, being a defenceman, but could potentially team with Justin Schultz and Oscar Klefbom to form the top half of Edmonton's blueline for years to come. It was a tough call but and ultimately, the right call.

There is no question Nichuskin would have made them a better team in 2013-14 but not necessarily over the long haul. Like many Russians before him, his willingness and want to improve his overall game has already come into question, as have his desires of wanting to remain in North America long term. He would have been a high risk/high reward pick but at this stage of the game, going after the sure thing was the move that needed to be made.

Some have questioned whether or not Nurse has what it takes to turn into a top flight NHL defenceman, which is more than fair to ask of almost any defenceman taken during any draft year. That said, his willingness to play a mean style, coupled with his ability to transition the puck up ice and his well documented leadership qualities, make him a fairly safe bet to morph into at the very least, a solid second pairing shutdown guy.

Personally, I was not a fan of the organization's decision to move Magnus Paajarvi to the St.Louis Blues in exchange for David Perron. Nothing against Perron, as he should make the Blue and Orange a far better team in the here and now. My concern, is I see Paajarvi developing into a third line guy that does everything well and being more than capable of playing in a top six role when necessary. Those guys don't exactly grow on trees.

Having said that, the time for the Edmonton Oilers to trade some of tomorrow, to help improve their roster today has arrived. While the talented Swede wasn't one of MacT's "guys", trading such a talent away could not have been easy. To his credit, he acquired a player that is entering the prime years of his career and probably champing at the bit to have the shackles of Ken Hitchcock's defensive system loosened from his person.

Make no mistake, Edmonton will want Perron to bring that defensive awareness with him to the Alberta capital but he can expect to be given far more opportunity to put his skill set to better use in Edmonton. Should the twenty-five year old find some chemistry with a couple of the Oilers plethora of young talented forwards, opposing teams could be in store for some very long nights during the 2013-14 campaign.

For the last number of years the Edmonton Oilers most glaring weakness has been their backend, Since the departure of Chris Pronger prior to the start of the 2006-07 season, Edmonton's blueline has been nothing more than one patchwork effort after another, One could argue, last year's edition was the worst of the bunch...something which Craig MacTavish could simply not allow to continue.

With all sorts of hype surrounding 2011 first round pick Oscar Klefbom, the organization had to ensure they did not handover a job to youngster in 2013-14. Some were hoping to see him get time in the AHL before becoming a regular in Edmonton, myself included, but by the end of the 2013 campaign, it would be hard to argue he wasn't already one of the Oilers top four defencemen.

With the quintet of Jeff Petry Corey Potter, Justin Schultz, Nick Schultz and Ladislav Smid all still in the mix for spots, MacTavish decided to make it a potential free-for-all. He proceeded to not only sign Anton Belov, former Oiler Denis Grebeshkov and Andrew Ference to free agent deals but also picked up defenceman Philip Larsen from the Dallas Stars, as part of the Shawn Horcoff trade.

By my count, that is nine guys fighting for seven spots and doesn't include Klefbom or the trio of Brandon Davidson, Taylor Fedun and Martin Marincin, all of whom saw regular duty with the Oklahoma City Barons in 2012-13. Are all of those names NHL caliber defencemen? No but the mere presence of thirteen capable blueliners will make the big Swede work for a spot on this team.

If the twenty year old comes to camp and is that much better than the vast majority of names mentioned above, it will be nearly impossible to keep him out off this roster, Maybe he stars the year in OKC and is up within a few weeks or maybe he makes it right out if camp. Whatever the case, Oscar Klefbom will have to earn his way onto the Edmonton Oilers in 2013-14 and both he and the organization will be far better for it.
Posted by Oil Drop at 3:29:00 pm