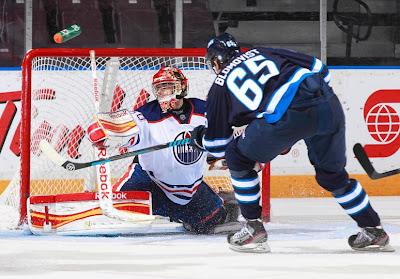 After watching the Edmonton Oilers fall to the Calgary Flames in their opening game of the 2013 Young Stars Tournament, it looked as though this batch of Oiler rookies could be in tough during their time in Penticton, British Columbia. Saturday night's clash with the Winnipeg Jets cemented that line of thinking even further, as the Jets cruised to an easy 7-2 victory.

Axel Blomqvist and Scott Kosmachuck led the charge upfront with two goal efforts, while Portland Winterhawks forward  Nic Petan had himself a three point night. Netminder Eric Comrie was solid in goal for the Jets, stopping 34 of the 36 shots fired his way, but the same could not be said for Edmonton's Philippe Cadorette.

It was quite simply a night to forget for the eighteen year old tender. Cadorette, who is attending camp on a tryout basis. Petan would open the scoring at 3:31, following an absolutely brutal giveaway from Chase Schaber. Just over a minute later, Kosmachuck would make it a two goal bulge, blowing past Martin Marincin on the rush and flipping a nifty little shot up and over the Oilers starting goalie..

In a blink of an eye, Edmonton found themselves down a pair and it would only get worse from there. After giving up three goals on sixteen shots in period one, Cadorette would allow three more to sneak past him, on just eight shots, staking Winnipeg to a massive six goal cushion after forty minutes of play.

In his defence, the young Oilers were an absolute train wreck in their own end for the second consecutive outing but unlike Tyler Bunz, who got the nod against the Flames on Thursday night, Cadorette was unable to stop the bleeding. Unfortunately for Edmonton, as bad as the 6-0 score line looked, the injury bug would hit before the middle frame was up and make things even worse.

With just under four minutes remaining, the Oilers Jackson Houck's night would come to a rather abrupt end, courtesy of a hit from behind from Winnipeg's Josh Morrissey. Houck suffered a head injury on the play and Morrissey was handed a boarding major and game misconduct for his troubles.

Despite generating chances, Edmonton was unable to get a puck behind Comrie during the extended man advantage. They would finally break the 2013 third round pick's shutout bid in the third, as both Kyle Platzer and Greg Chase found the mark. However, there would be no comeback, as Blomqvist would closeout the scoring with his second of the night, after an egregious turnover off the stick of Austin Fyten.