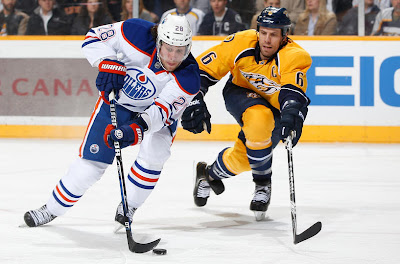 While many in the analytic stats community will tell you the fan favourite is a borderline NHLer, the fact remains he was the only Oilers forward to produce in a bottom six role from 2010-2012. Say what you' d like about the twenty-nine year old winger but 36 goals in 168 games is nothing to sneeze at...especially on this team.

That said, with the aforementioned eye injury clearly effecting his game and his production dropping to just two goals in twenty-seven games, it looked as though the former Nashville Predator had played his last game in Orange and Blue. With Craig MacTavish hinting at major changes coming to the club's third and fourth lines, all signs were pointing to the pending free agent playing elsewhere in 2013-14.

One small problem. Jones wanted no part of playing anywhere but the Alberta capital.

"It's a great place. A great city with passionate hockey fans and a culture built around the hockey team that anybody would be lucky or blessed to play for. I left a little bit to be a desired last year and I wanted to come back and redeem myself and prove to people that I still have a ton of game left in me."

To his credit, the pending UFA accepted a one year deal for $1.5 million and MacT is hoping he will get a motivated and somewhat annoyed Ryan Jones come October 1st.

The rookie GM held true to his word, bringing in the likes of Will Acton, Boyd Gordon, Ryan Hamilton, Jesse Joensuu and Linus Omark, in hopes of changing the makeup of his roster. Add those names to possible returnees like Mike Brown, Ben Eager, Jones, Anton Lander, Ryan Smyth and suddenly you have a battle for spots inside Edmonton's bottom six.

What the organization ultimately does with Ales Hemsky will play a big part in who slots where but don't be surprised to see Jones return to his previous form. Outside of last year's blip on the radar screen, the former fourth round selection of the Minnesota Wild, has been an 11% - 14% shooter throughout his career. He might not be the most talented guy in the world but his willingness to shoot the puck and go to the dirty areas on the ice, generally result in him scoring goals.

According to Jones himself, courtesy of EdmontonOilers.com, he plans on being that guy once again in 2013-14.

"I need to become a menace when I'm out there, be hard to play against, always be around the net and just be a guy that when the other team leaves the ice they don't enjoy when you're out there. That's one thing I'm going to work hard at this summer is get into physical condition to be able to do that and when next year comes around I'll put it in my mind that that's player I want to be and that's the player I need to be to help this team move forward."

Ryan Jones knows what he has to do and he is definitely talking the talk. Now it is up to him to walk the walk and make it next to impossible for Dallas Eakins to take him out of the the lineup. If he goes out and does that, Jones will have himself a bounce back season.