Arcobello saves the day, as Oilers squeak past Panthers 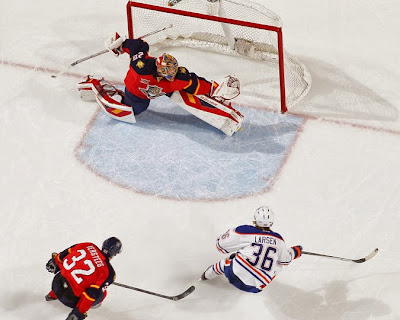 On the heels of five consecutive losses, the Edmonton Oilers nearly found a way to make it six but managed to finally end their run of futility, edging the Florida Panthers 4-3 in overtime on Tuesday night. Mark Arcobello continued his impressive start to the season, scoring twice, including the OT winner, while defencemen Philip Larsen and Taylor Fedun each lit the lamp for their first goals of the year.

Fedun, who was making his NHL debut, had to be pinching himself after playing just over a eleven minutes along the Oilers blueline. After suffering a gruesome broken leg during the 2011-12 preseason, the Edmonton native worked his tail off to get back playing and was rewarded with what was basically a storybook night.

Boyd Gordon had about as quiet a three point night as you will ever see a guy have, while Ryan Nugent-Hopkins was at his best, picking up two more assists on the night. The win improved the Oilers record to 4-10-2 on  the season but they still find themselves buried in the basement of the Western Conference standings.

It was definitely a night of firsts but another horrible late goal against Devan Dubnyk, nearly made it all for not. Scottie Upshall would tie things up with all of fifty-eight seconds to go, as his harmless looking chip shot somehow managed to flutter past Dubnyk's glovehand. It was just an awful goal and as per usual, it came at the worst possible moment.

Luckily, Upshall decided he would go from hero-to-zero, taking an absolutely ridiculous tripping penalty mere seconds into overtime, sticking out his knee to slowdown Nugent-Hopkins. The Oilers much maligned power play would make him pay for his mistake, as Arcobello ripped home his second of the night, courtesy of a lovely little feed from Ales Hemsky.

Disaster averted but this one was far from a masterpiece.

Dallas Eakins' fragile group came out flat to start the game and found themselves trailing by the midway mark of the frame, as Marcel Goc hammered his fourth of the year past Dubnyk, with the trio of Sam Gagner, Ryan Smyth and Nail Yakupov at their nonchalant best in the Oilers zone. It was not the start Eakins was hoping for but that goal seemed to wake Edmonton up.

From that point on, the Orange and Blue took it to the Panthers and they would be rewarded with the equalizer before the intermission hit. Nugent-Hopkins took what looked to be a nothing play along the Oilers blueline and turned it into a two-on-one, thanks to Larsen's decision to join the rush. The talented rearguard would be handed a wide open look at a yawning cage for his trouble, as RNH found him with a gorgeous pass.

Edmonton would take their first lead of the night early in period two, torching Jacob Markstrom for two goals in thirty-three seconds. Arcobello would finally pot his first of the year and of his career, after countless opportunities through Edmonton's first 15 outings and a couple of more during the opening frame. While it wasn't a thing of beauty, think Nazim Kadri's "snipe" against Dubnyk earlier this year, it was a goal that was long overdue.

The Nuge would continue his mastery of the Panthers after a timely shot block from Ales Hemsky allowed the Oilers #1 centre to break up ice with Jordan Eberle on an odd man rush, before delivering another breath taking touch-pass to a streaking Fedun. The youngster made no mistake, slamming home his first and instantly going into full out party mode. The grin on the kid's face was hard to ignore and for the first time in quite some time, Edmonton looked to be headed to an easy two points.

While it ended up being far more difficult than it should have been, courtesy of a less than stellar third period and another hiccup from their netminder, it was a win that this team desperately needed. 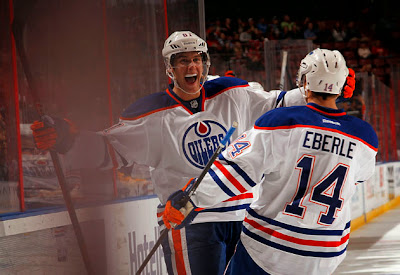