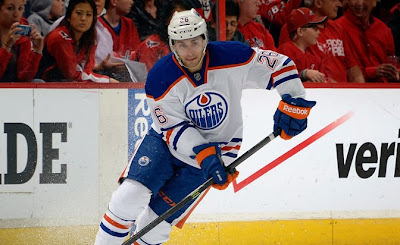 Heading into the 2013-14 season Edmonton Oilers centre Mark Arcobello was handed the chance of a lifetime. With Ryan Nugent-Hopkins set to start the year on the sidelines, Sam Gagner nursing a broken jaw and Taylor Hall playing out of position, the former Yale University grad had a massive opportunity staring him the face.

To his credit, the twenty-five year old has made the most of that opportunity and has unquestionably earned himself a spot on this roster for the remainder of the year. As the Oilers near the quarter pole of what has been a rather disappointing season, Arcobello is tied for the team scoring lead with Nugent-Hopkins at twelve points and currently leads the way with ten assists.

The undrafted American has easily been the biggest surprise of the young season and along with newcomer Boyd Gordon, has been the most consistent forward in this lineup. He has become a guy that head coach Dallas Eakins relies on in all situations and one fans have been calling for to play ahead of Gagner as this club's second line centre.

While he is small in stature, Arcobello has proven to be more than capable of handling himself in the face-off dot (52.9%) and has shown to have more than a clue in his own end of the rink. Don't get me wrong, he is no Pavel Datsyuk out there but he is rarely out of position in the Oilers zone and generally makes the right decision both with and without the puck. Nothing special or flashy...just solid.

Unfortunately, with RNH and Gordon cemented in place and Gagner not far behind, Arcobello will have his work cutout for him moving forward. He has shown the ability to play both down the middle and on the wing, definitely a positive on his side of the equation, but with Craig MacTavish nowhere near being done with his reconstruction of this roster, there is no guarantee he has a spot moving forward.

That said, if Mark Arcobello continues to play the type of game he has shown over the first five weeks of the current season, the young man may very well solidify himself as an NHL regular. He is yet another small forward, something the Edmonton Oilers have absolutely no need for, but who's to say there won't be other teams looking to add a talented centre to their roster?

Moving forward, Craig MacTavish will have some very tough decisions to make and don't be surprised to see Mr. Arcobello make things even harder on his general manger.
Posted by Oil Drop at 5:21:00 am