Oilers mail in yet another home ice effort 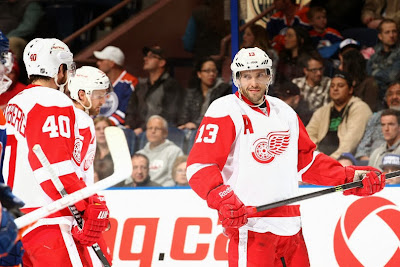 Well that certainly didn't take long now did it. After limping their way through the first month of the 2013-14 NHL season, the Edmonton Oilers had to have been hoping for their fortunes to turn with the start of a new month on the horizon. Unfortunately it was more of the same on Saturday night at Rexall Place, as fans across Oil Country are left wondering if this group will ever be able to turn this thing around.

In what was easily their worst beat down of this young season, the Oilers managed to drop their fourth starlight game on home-ice and fifth overall, falling 5-0 to the Detroit Red Wings. Edmonton fired all of 14 shots on rookie netminder Petr Mrazek, who stopped them all in earning his first career NHL shutout, while the Wings scored on five of their 31 shots on goal.

Starting goaltender Richard Bachman lasted all of fourteen minutes before being forced to leave the game with what looked to be an apparent groin injury. That did not stop him form picking up the loss on the night, allowing two goals on just nine shots, while Jason LaBarbera stopped nineteen of the twenty-two pucks sent his way in yet another relief performance.

Edmonton did come out with some jump to kick things off but it would take Detroit just five minutes to open the scoring, courtesy of a brutal turnover from defenceman Jeff Petry, as Darren Helm beat Bachman between the wickets on a partial breakaway to make it 1-0 for the visitors.

They would double their lead all of twenty-seven seconds later, as Tomas Tatar pounced on an enormous rebound for his third of the year, as Edmonton was once again caught running around in their own end of the rink. In the blink of an eye, we went from watching a hockey game between two teams, to a demoralized Oilers squad literally going through the motions for the next fifty-five and half minutes.

The Red Wings would score three more times as Jakub Kindl, Joakim Andersson and Todd Bertuzzi would all find the back of the Oilers net over the final two period of play but they were nothing more than window dressing. If Dallas Eakins' squad generated a single quality scoring chance during the final two periods, I have yet to see it.

If you were to use one word to sum up the Oilers collective efforts on Saturday night, about the only one that comes to mind is embarrassing. While there is no shame in losing to Mike Babcocks' Detroit Red Wings, to come out with that type effort when you are sporting a Western Conference worst 3-9-2 record, is simply unacceptable.

While it's one thing to go out and lose to a better team, it's something completely different to go out and not even attempt to "compete". There is no question the Oilers are dealing with an absolutely ridiculous amount of injuries to their group, including their most important player in Taylor Hall and the guy who has arguably been their best all around forward in David Perron.

That said, injuries are not an excuse when it comes to a team's willingness to fight for every loose puck or try to outwork the opposition. We saw none of that fight last night at Rexall Place and it was frankly disgusting to watch.
Posted by Oil Drop at 9:51:00 am