Oilers explode for seven in easy win over Blue Jackets 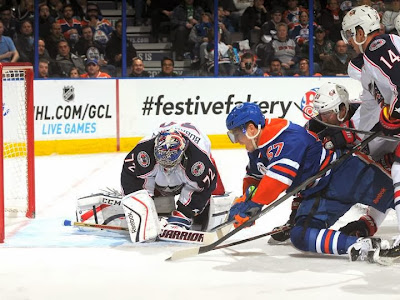 It was a night Edmonton Oilers fans have been waiting for all season long and not surprisingly, it came against the only team Edmonton has truly dominated on home-ice in recent memory. On the strength of a three goal night on the man advantage and a career high four point effort from David Perron, the Oilers were finally able to bring their seven game losing streak at Rexall Place to a halt, destroying the Columbus Blue Jackets by a score of 7-0.

Ryan Smyth had his first three point night in ages, while the trio of Jordan Eberle, Ryan Nugent-Hopkins and Nail Yakupov all had two point outings, as the Blue Jackets fell for the sixth consecutive time on Rexall Place ice.

Netminder Devan Dubnyk stopped just fourteen shots in earning his first shutout of the season, in what was by far and away his easiest start of the year. With Ilya Bryzgalov now in town, Dubnyk will be pushed for playing time and appears to be ready for the challenge.

Edmonton hit the scoresheet early and often in this one, as Jordan Eberle pounced on a loose puck, before sliding his sixth of the year behind a down and out Sergei Bobrovsky at the 2:37 mark. Perron would pot his first of two on the night just under ten minutes later, as the feisty winger notched his sixth of the season with the Oilers on the man advantage.

They would pretty much put this one to bed before the period was out, as Smyth batted home Sam Gagner's cross-ice pass for number four on the year, to extend the lead even further. Twenty minutes into this one and Edmonton held a 3-0 lead on the scoreboard and a massive 15-3 advantage on the shot clock.

Dallas Eakins' side would continue to pour it on in period two, as Perron, Yakupov and defenceman Justin Schultz, who was making his return to the lineup after missing eight straight with a nagging groin injury, would expand the lead to a half-dozen. The young Russian's second period power play marker was his third in his last five games and team leading fourth on the man advantage.

Since causing a bit of a stir with comments he and agent Igor Larionov made around his lack of playing time, the 2012 first overall pick has done nothing put produce. After scoring all of three points in his first sixteen games and posting a league worst -14 rating, Yakupov has rebounded with five points in his last five outings while not adding to his ugly plus/minus rating.

Taylor Hall would close out the scoring on a late third period breakaway to make it 7-0, despite partially fanning on his shot attempt against backup netminder Curtis McElhinney, but it was just one of those night's in which the home side could do no wrong. If you were to include the final period of their 4-2 win against the Calgary Flames on Saturday night, Edmonton has outscored their opposition by a score of 11-0 over their last four period of action.

With the Florida Panthers set to pay a visit to Rexall Place later this week, it could be more of the same for the Oilers come Thursday evening. That said, with the defending Stanley Cup champs back in town on Monday night and a stretch of six games in nine nights next on the docket, this would be an ideal time for Dallas Eakins' crew to get themselves going in the right direction.

The scoring outburst is definitely nice to see but let's put this into perspective. Since beating the Montreal Canadiens on October 22nd to closeout their season high six game road trip, this team has won just three games. Those wins came against the Panthers, Flames and Blue Jackets...three of the worst teams in the entire NHL.

Make no mistake, there is still a ton of work to be done but at least for one night, the Edmonton Oilers managed to send their fans home with  a smile on their collective faces.Which is most certainly a step in the right direction.
Posted by Oil Drop at 2:49:00 pm