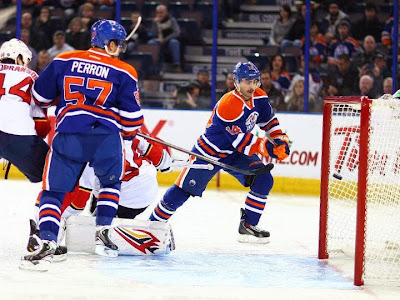 On the strength of a seven point night from the top line of Jordan Eberle, Taylor Hall and Ryan Nugent-Hopkins, the Edmonton Oilers pushed their season high winning streak to three straight with a 4-1 win over the visiting Florida Panthers at Rexall Place on Thursday night.

Nugent-Hopkins led the charge upfront with three assists, giving him five over his last two games, while Hall chipped in with a pair of helpers on the night. The duo of Eberle and David Perron continued their recent goal scoring hot-streaks, lighting the lamp for the third consecutive night, as the Oilers won back-to-back games on home-ice for the fist time since April 1st, 2013.

Coming off their biggest offensive explosion of the season in a 7-0 victory over the Columbus Blue Jackets on Tuesday night, Edmonton wasted no time in jumping all over the visiting Panthers. Eberle would open the scoring for the third consecutive game, flipping a rebound up and over starter Tim Thomas at the fifty-seven second mark, as Edmonton's suddenly potent power play delivered with an early goal on the man advantage.

Despite dominating much of the opening period, the Oilers would not extend their lead until the six minute mark of period two, as Sam Gagner would finally get off the schneid. Gagner would bury an absolutely gorgeous cross-ice feed from Nail Yakupov for not only his first of the season but his first goal in twenty-three games. That said, #89 has picked up points in four consecutive games and looks to be a far more comfortable since being reunited with Ales Hemsky and Yakupov.

Perron would essentially put this one to bed roughly five minutes later, redirecting Justin Schultz point blast past Thomas for his team leading eighth of the season. The former 2007 first round pick was a buzzsaw all night long, leading the team with nine shots on goal and continued to push the pace whenever he hit the ice. The power play marker was his fourth of the year on the man advantage, which ties him for the team lead with Yakupov.

Scottie Upshall would give the Panthers a ray of hope before the period was out, squeaking his fourth of the year through Devan Dubnyk from a tough angle to make it 3-1, as the Fort McMurray native has now scored three of his four goals against Dubnyk and the Oilers.

Edmonton managed to get themselves into penalty trouble for much of the final frame but Florida's league worst power play performed as expected, generating next to nothing on the man advantage. Eberle would closeout the scoring with his second of the night into an empty net, after Hall forced a turnover along the Oilers blueline to start the entire sequence off.

With three consecutive wins in their pocket and no game on their schedule until Monday evening's matchup with the Chicago Blackhawks, Dallas Eakins' crew could not have handpicked a better time to have a couple of days off. While wins against the Calgary Flames, Columbus Blue Jackets and Florida Panthers would have all been considered very winnable games heading into the 2013-14 campaign. Unfortunately, things have rarely gone according to plan for the Edmonton Oilers this season.
Posted by Oil Drop at 7:25:00 am