Two points they had no business getting 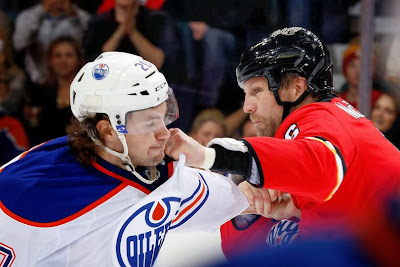 With a potentially embarrassing loss to the Calgary Flames staring them squarely in the face, the Edmonton Oilers used some fortunate bounces  to their advantage in earning a 4-2 coming from behind victory against their provincial rival on Saturday night. A four goal third period explosion, due in large part to the play of Flames starting goalie Reto Berra, proved to be the difference. David Perron scored what turned out to be the eventual game-winner on a bad angled shot that Berra would love to have back.

Considering how many times the Oilers netminding has let them down this season, it was about time the shoe was on the other foot. Devan Dubnk was very good down at the other end of the rink, stopping 33 shots on the night and making a number of key stops to keep his team in it.

While the two points had to have been a huge relief for Dallas Eakins' side, the fact they were badly outplayed over the opening period and a half of by a team like Calgary, has to be somewhat troubling. Outside of Luke Gazdic stepping up a weight class or two against Brian McGrattan and Andrew Ference destroying Lee Stempniak in a one sided tilt, after the Flames winger hammered the Oilers captain with a hard hit, Edmonton had nothing going.

They started to show some life midway through the second but Calgary would extend their lead to 2-0 late in the frame. Denis Wideman hammered home his second of the year past a helpless Dubnyk at the 17:08 mark, after rookie Sean Monahan had given them the lead midway through the first with eighth of the campaign.

The shot clock read 24-14 at the intermission and Edmonton seemed destined to drop their sixth straight and reach a new low point. Calgary came out flying to start the third but Dubnyk stood tall and his teammates would finally pay him back for his work, as Taylor Hall and Jordan Eberle would team up for Edmonton's ice-breaker.

Hall lugged the puck from deep in his own end to start a rush up ice and found Eberle in the slot with a lovely cross-ice pass and the Oilers sharp-shooter made no mistake, burying his fifth of the year. While the finish looks nice on the highlight reel, I am still uncertain as to what Berrra was trying to accomplish in charging out of his net.

That gave Edmonton life and suddenly they started to come in waves. Ales Hemsky would get them back on level terms at the 8:18 mark, as Sam Gagner's point shot was deflected high into the air and simply fluttered its way towards the Flames goal, before Hemsky swatted home his fourth of the year into the back of the net.

Berra clearly saw the puck coming but was clearly mesmerized by its trajectory and simply allowed it to flutter over his head. In all honesty, he looked as though he was trying to head the puck like a soccer defender instead of simply grabbing the puck out of the air.

Perron would complete the comeback just over two minutes later, beating Berra from an absolutely dreadful angle to make it 3-2. In a span of 6:42, Edmonton had turned a two goal deficit into a a one goal lead and it was ll due to goaltending. Dubnyk was very good for the Oilers and Berra was simply not good enough for the Flames.

Edmonton's win coupled with the Buffalo Sabres loss against the Toronto Maple Leafs, helped move them out of the basement of the National Hockey League standings and put an end to what had been a five game losing skid. They return home with not only a win under their belt but also with the good fortune of having a pair of struggling teams in the Columbus Blue Jackets and Florida Panthers next on their dance card.

That said, considering the Oilers have by far and away the worst home record in the NHL at 1-7, expecting either game to be guaranteed wins would be a major mistake. The club is expected to call up netminder Ilya Bryzgalov over the next day or so, as the free agent signing looks to make his Oilers debut after a brief two-game conditioning stint with the Oklahoma City Barons in the AHL.
Posted by Oil Drop at 12:39:00 pm