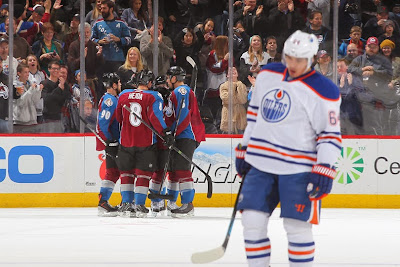 The day after being called out in this very spot for seemingly making nothing but excuses for his players and their losing ways, Edmonton Oilers head coach Dallas Eakins took aim at his top players following his club’s 4-2 loss to the Colorado Avalanche on Thursday night.

Despite another solid effort from Taylor Hall, who looked to be a man possessed for much of the evening, the Oilers dropped their fifth straight and return home empty handed from their four game road swing.

Devan Dubnyk was rock solid in his return to the net after a two game hiatus, stopping thirty-six of thirty-nine shots on the night. While Sam Gagner’s nightmarish season took a turn for the worse late in the first period, as #89 was assessed a five minute major and game misconduct for crossing checking Paul Stastny in the face and Edmonton up 1-0.

While Stastny made the initial connect, clipping Gagner with an errand high-stick that inexcusably went unpunished by the on ice officials, the twenty-four year old centre’s reaction was completely uncalled for. There is little doubt his response came from being clipped under his face shield but cross-checking a guy in the face is still cross-checking a guy in the face.

Edmonton would complicate matters further at the end of the period, as Hall was assessed a two minute minor for unsportsmanlike conduct by referee Mike Leggo. Apparently the veteran official got the wrong guy on the penalty call but at the same time, someone from the Oilers bench said something to trigger the call.

Tyson Barrie would score a minute into the two man advantage to get the Avs back on level terms but for roughly the next ten minutes, it was the Taylor Hall show. From the moment he stepped out of the penalty box, the Oilers #4 appeared to be on mission. Having already beat starter Semyon Varlamov with a perfectly placed wrist shot to put Edmonton up a goal in the first, the former first overall pick was a one man wrecking crew on Ryan Nugent-Hopkin’s second period go ahead marker.

Hall essentially took out both Jan Hejda and Erik Johnson on a one man for forecheck, before stealing the puck and finding RNH for an easy tap-in to restore the Oilers lead at the 12:10 mark. Having grabbed their second lead of the night and overcoming a 17-5 shellacking on the shot clock during the opening twenty minutes of play, all signs were pointing to Edmonton heading home from their four game road swing on a positive note.

Unfortunately for them, they would become unglued over the final seven minutes of the period. Ryan 0’Reilly would tie things up at two apiece with exactly five minutes left, snapping home his eleventh on the campaign into a yawning cage, as David Perron completely lost sight of his man on the play.

Roughly three minutes later, Edmonton would be given a glorious opportunity to grab their third lead on the night, as Patrick Bordleau was whistled down for interfering with Perron just outside the Oiler blueline. However, this time it would be the Avalanche who would take their first lead of the night, courtesy of yet another shorthanded goal against Dallas Eakins crew.

An ill-advised cross ice pass from defenceman Justin Schultz would send the Avs penalty killing duo of Marc-Andre Cliche and Maxime Talbot on a two-on-one break, with the former Pittsburgh Penguin beating Dubnyk along the ice with a nifty little finish for his fourth of the season. In the blink of an eye, a chance at going up 3-2 turned into a one goal deficit and the Oilers didn’t know what hit them.

Talbot’s goal was the eighth shorthanded goal the men in Orange and Blue have allowed this season, as their highly touted power play continues to cost them…at both ends of the rink. Despite their best efforts to push the pace over the final twenty minutes to try and get that equalizer, they would fall short for the twenty-third time in regulation.

To his credit, Eakins didn’t let his players off the hook this time around, as he went after his skilled guys during his post game scrum.

“What’s the answer? Is the answer to maybe put out Boyd Gordon and Jonesy and Ference and Nick Schultz? That’s not the answer!!! The answer is for those players to get the job done and they have to be better. It’s as simple as that.” There was no mention of bad bounces or bad habits that were formed under previous coaching regimes. There was none of that. On this night, Eakins came clean and it was refreshing to hear. Despite the many deficiencies this group has as a collective unit, more often than not, their best players haven’t delivered when it mattered most. Part of the deal with being the top dog is producing at crunch time.

Through the first thirty-seven games of this season and much of the final three and half weeks of their 2013 campaign, the Oilers best players have failed to “get the job done” with any sort of acceptable frequency. They have their great games and/or moments but on far too many nights, they fall well short of meeting the criteria of being quality top line players.

Some have struggled more than others and the vast majority of them are still quite young. That said, at the end of the day, the results tell the story. One could argue that Dallas Eakins has almost coddled his better players to a fault this season but apparently those days have come to an end. The time for a little tough love has arrived and in my mind, it is long overdue.
Posted by Oil Drop at 10:14:00 am