Sorry Mr. Eakins but bad bounces are not the issue 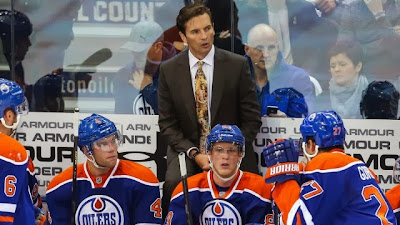 Like many of his young players, Edmonton Oilers head coach Dallas Eakins is in the midst of finding his way in the National Hockey League. Both he and his players are learning on the fly and not surprisingly, both have had more than their fair share of hiccups along the way.

With that said, the fact Eakins and some of his players keep using bad bounces as some sort of excuse for the Oilers losing games, is more than little aggravating. While I understand the rookie coach doesn’t want to be continually jumping all over his players, as that act tends to grow old quickly, attributing their blunders to nothing more than dumb luck is quite concerning.

Hearing various players go on about how they are proving they can play with Team A or B but never actually win is frankly ludicrous. Yes they are showing signs of improvement but making excuses for losing should never be acceptable…and I mean never.

Add to that, Eakins continually going on about these so-called ”bad bounces” and one has to wonder about what they are trying to accomplish here. For example, if he was referring to the puck literally bouncing on Taylor Hall during a third period breakaway on crappy ice against Los Angeles, I could see his point. Somehow I doubt that is what he was trying to get at.

The two pucks that found their way behind Ilya Bryzgalov on Tuesday night had nothing to do with bad bounces and everything to do with poor decision making from many of his players. If you are unsure as to what I mean, just go and watch the replay of the Kings to goals and you will know exactly where I am coming from. Dismissing those sorts of mistakes as nothing more than a bad break, does nothing to help this group improve.

In nearly every sport, chances are usually generated from mistakes your opponent makes. More often than not, the team that makes the fewest errors and is committed to playing whatever system their coach wants them to employ is one that generally comes out on top. Individual players can single-handedly change the outcome of games from to time to time but over the long haul, the team that plays the smartest is the one that walks away with the “W”.

No one plays a perfect game every time out. That said, when you are sitting in the basement of the Western Conference standings with an 11-22-3 mark, the last thing anyone wants to hear is the Oilers going on about luck not being on their side. Good teams make their own breaks and at this stage of the game, the Edmonton Oilers are not a good team.

Moral victories are nice and all but as I mentioned earlier, losing should never become an acceptable outcome. Unfortunately, that has been the case for far too long and in my mind, a sense of complacency appears to have set in within the organization...be it in the front office or on the ice.

There is no question the Edmonton Oilers have to get better players in order for this team to improve but that doesn’t mean you excuse what is going on in the here and now. Again, mistakes happen but simply dismissing those blunders to nothing more than chance and not addressing them in any sort of meaningful manner, is a good way to ensure you never truly improve.
Posted by Oil Drop at 11:15:00 am

Email ThisBlogThis!Share to TwitterShare to FacebookShare to Pinterest
Labels: eakins