Losses continue to pile up, despite another decent effort 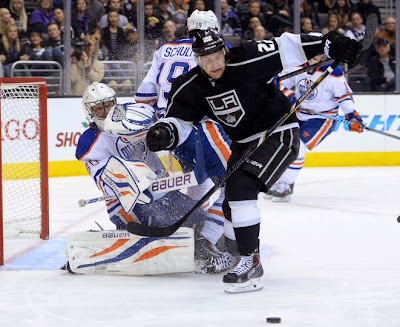 Four games into what is without question the toughest stretch of games on the Edmonton Oilers 2013-14 schedule the Oilers have gone zero for four, despite playing some of their most consistent hockey of the season.

While Tuesday night’s 3-0 loss to the Los Angeles Kings should surprise absolutely no one, the continual losing has become a little much to take for everyone involved. Ilya Bryzgalov gave his team every opportunity to pull off the upset, stopping thirty-seven of thirty-nine pucks fired his way, but in the end it was not nearly enough.

Edmonton managed to fire twenty-four shots on Kings netminder Martin Jones but the rookie continued to be lights out, registering his third shutout of the season and improving to 6-0 on the year with a an eye-popping 0.82 GAA and a .972 SV%.

Sam Gagner had yet another tough night, in what is quickly becoming a season to forget for the former sixth overall pick. Gagner was an ugly -3 on the evening and played a key role in all three goals against. While Dustin Brown’s empty netter had no bearing on the eventual outcome, the Oilers #89 made a pair of glaring errors on both of the Kings other goals, with a big assist going to Nick Schultz on Jordan Nolan’s insurance marker.

Beating a team like Los Angeles is tough enough at the best of times but when you gift wrap a pair of goals, it is next to impossible to come away with a “W”. Edmonton’s top line of Jordan Eberle, Taylor Hall and Ryan Nugent-Hopkins created their fair share of chances but as per usual, Edmonton’s young stars continue to struggle to put pucks in the back of the net against teams who play a punishing brand of hockey.

They played another solid road game but come crunch time, they had nothing. Outside of Hall’s early third period breakaway attempt, in which he lost control of the puck on an ill-advised move on a terrible ice surface, Dallas Eakins side didn’t get as much as a sniff of a chance on Jones over the final twenty minutes. The Kings put it in shutdown mode and the Oilers could do nothing about it.

Drew Doughty destroyed Mark Arcobello with a huge hit midway through the third and the diminutive centre never returned. Despite seeing limited minutes in a fourth line role, Arcobello was by far and away Edmonton’s most physical forward on the night…which says all you need to know. As a collective unit, the Oilers didn’t backdown from the Kings but they surely didn’t try to engage them physically. If you are going to have any sort of success against a team like LA, you have to be willing to pay the price and too many players on this team are simply unwilling to do so.

In my mind, it is safe to say the Edmonton Oilers overall game has shown signs of improvement since the start of the season. That said, they continue to lose hockey games and have now fallen back into 29th place in the NHL’s overall standings. Only the Buffalo Sabres have been worse and with just five games remaining until the midway point of their schedule, Edmonton have won all of eleven hockey games.

Think about that for a second. In order for this team to reach the seventy point mark, they would essentially need to go .500 over their final 46 game…leaving them roughly thirty points out of a playoff spot. Let that sink in for a minute and realize just how bad this season has gone.
Posted by Oil Drop at 10:33:00 am