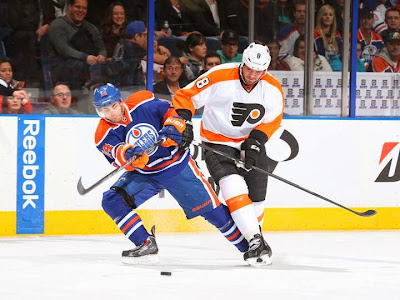 Expecting the Edmonton Oilers, as they are currently structured, to no be regularly dominated by teams who play a skilled but physical brand of hockey, is nothing more than wishful thinking. With that said, none of us should be overly surprised to see the Philadelphia Flyers walk into Rexall Place and pretty much do whatever they wanted in beating the Oilers 4-3 in a shootout on Saturday night.

If not for an outstanding effort from netminder Ilya Bryzgalov and an awful opening five minutes from the Flyers, this one would not have even been close. This squad in simply not equipped to deal with Wayne Simmonds, Scott Hartnell and company over a full sixty minutes. The only way Dallas Eakins' side stays in such a game is a) their goaltender stands on his head, b) Philly's starting goalie has an off night or c) the Flyers don't bother showing up.

Bryzgalov held up his end of the bargain, while Taylor Hall and Ryan Nugent-Hopkins took full advantage of Philadelphia looking like a team coming off a four day Christmas break to start the game. However, when Craig Berube's team found their legs, Edmonton had no response.

The Flyers out shot the Oilers 25-7 over the final forty minutes of play, including a 14-3 advantage during a second period in which the Orange and Blue were completely outclassed. While it was a tough night for Edmonton's penalty killers, allowing all three goals against, it was their power play which would ultimately let this team down.

In order for this group to have a hope in hell against most teams in this league, their power play has to be a weapon the opposition fears. Unfortunately, at this very moment, it has become nothing but a hindrance to this hockey club. Not only are they not producing goals on the man advantage but more often than not, they are giving up Grade "A" scoring chances to boot.

With Edmonton up 2-0, the Flyers handed them three consecutive power plays before the first period was out. Had the Oilers converted on just one of those chances, this game would have likely been all but over. Steve Mason would have unquestionably received the first period hook and Philly would have luckily gone away quietly.

Chalk it up to a bad start after a four day hiatus and move on to Vancouver for a tilt against the Canucks on Monday night, followed by date with the Calgary Flames on Tuesday. Everything was pointing to this one being another cake walk for the Oilers. Instead they proceeded to do absolutely nothing with the opportunity and gave the Flyers the spark they were looking for. Can you say momentum killer?

The third power play actually carried over into the second period and if not for a couple of monumental stops from Bryzgalov off Sean Couturier, Philly would have scored yet another short-handed marker against the Oilers. Edmonton currently leads the league in short-handed goals against with eight and with how things have gone of late on the man advantage, that number could continue to grow.

So what's the problem? Obviously they are feeling the pressure as a collective unit on the power play but for the most part, they haven't even been generating scoring chances. With the sort of skill this team has on their roster, the dry spell they are on should almost be an impossibility. It's not as though this has been going on for a handful of games. It has been happening for weeks and there appears to be no end in sight.

Part of the issue is players ongoing refusal to simply dump in the puck and go get it in the corner and the other is passing up on wide open looks on net. Look around the league at the better power plays all of them do the same thing. They dictate the play and have the opposition running around. In the Oilers case, it's the complete opposite.

Teams pressure them all over ice, be it when they are trying to enter the zone or when they actually have gained control in the offensive zone. When Edmonton's power play is clicking, they pass their way out of that pressure and end up generating quality chances. At the moment, they are all over thinking things and hanging on to the puck for far too long. Couple that with their unwillingness to adjust their approach and you have the mess that you now see.

Despite their various struggles as a team, Dallas Eakins' number one priority has to be fixing the power play. For this group to go anywhere, be it in the present or the future, they need to relocate their mojo on the man advantage. It has to be the bread and butter.

Some will point to their challenges in the defensive zone as their biggest problem and while that may be true, much of that is a personnel issue. With that being the case, focusing on "fixing" something you truly can't address until the off-season, would be a big mistake. That isn't the case with power play. The pieces are already in place. Now it 's up to everyone involved to go out and fix it. Do that and the goals will start coming.
Posted by Oil Drop at 11:42:00 am