Time is running out on both Dubnyk and Gagner 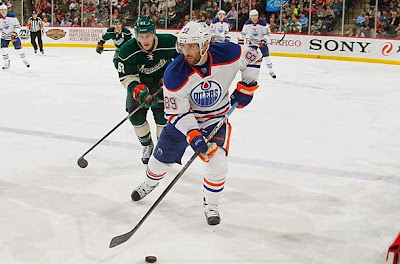 So at what point does an organization have to seriously consider moving on from a player.Is it 5-7 years after being drafted? 8? 9? 10? Of course every situation is different but the Edmonton Oilers will have some difficult decisions to make when it comes to both Devan Dubnyk and Sam Gagner.

When it comes to Dubnyk, the writing has pretty much been on the wall for some time. From the moment he took over as the Oilers GM, Craig MacTavish has been trying to improve his goaltending. He was unable to accomplish that leading up to the 2013-14 campaign but decided he had seen enough after his team’s early struggles.

Despite being all but mathematically eliminated from playoff contention by early November, MacT still decided to take a flyer on unrestricted free agent Ilya Bryzgalov in hopes of improving his netminding. Some looked at the move as nothing more than the club trying to upgrade on backup Jason LaBarbera and creating more of a completion to egg Dubnyk on.

Sorry but if you truly believe that, you are kidding yourself. The chance of the Oilers former 2004 first round pick returning as this club’s starter are basically nil. This organization has had ample opportunity to stand behind Dubnyk and tout him as their goaltender of both the present and future. They have done nothing of the sort, leading me to believe MacT and company have already moved on from the twenty-seven year old puckstopper as being their #1 guy.

Unlike Devan Dubnyk, the organization has bent over backwards to keep reminding anyone willing to listen, that Sam Gagner remains a very big part of the Oilers future. Obviously, they see him as a key piece but doesn’t the question why they feel that way have to be asked? Based on performance, should the former 2007 sixth overall selection not be in the same boat as #40?

We are now seven years into Gagner’s career and we are still seeing the same mistakes. There is no question #89 has offensive ability but he has yet to produce the type of numbers that are needed for a player that has such a one dimensional game. Contrary to what some may like to suggest, this isn’t something that has crept into the twenty-four year old's game over the last couple of seasons. He certainly has regressed even further since the start of the 2013 campaign but the issues have been there since Day One.

In his defence, Gganer has had to deal with coming back to early from a broken jaw but let’s be honest here. We have seen this song and dance far too often and nothing seems to change. Instead of having Dallas Eakins dish out some tough love to his “young” second line centre, we continually see him get his nineteen minutes of ice on a nightly basis. Heck he played over twenty-three minutes against the Calgary Flames during Saturday night’s 2-1 loss to the provincial rival.

With Gagner signing a 3yr/$14.4 million extension during the off season, this was supposed to be the season in which we saw a true progression in his game. In order to be worth that type of coin, he needs to either be a legitimate two-way top six forward or a one trick pony that puts up a ton of points. Unfortunately for both the player and organization, he has been neither and if it continues, this team will never improve.

So again, at what point do you have to turn the page? The ball is now in your court Mr. MacTavish. It is up to you to try and keep this “re-build” moving in the right direction and that may mean sending pieces away that you really have no interest in seeing leave town. It might be tough to do but that doesn’t change the fact it is still a necessary evil.
Posted by Oil Drop at 10:57:00 am