Where have these guys been this season? 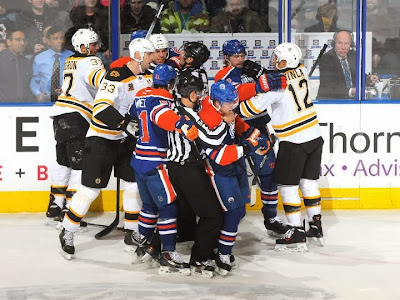 In a season in which very little has gone right for the Edmonton Oilers, last night’s 4-2 loss to the Boston Bruins was about as close to a win as a team can get without actually earning any points in the standings.

It was by far and away the finest effort this group has put forward against a truly elite level opponent this season and one that could have very easily gone their way. From the drop of the first puck, Boston took the game to the Oilers and they could do little to stop them.

To their credit, they continued to fight and as they neared the midway point of the period, Dallas Eakins’ side had begun to generate chances of their own. Unfortunately, that all changed at the 10:25 mark.

After standing on his hand for much of the opening ten minutes, Devan Dubnyk proceeded to do what Devan Dubnyk does on far too many nights. Yet another god awful goal against and as per usual, it came at the worst possible moment.

Just over six minutes later, Jarome Iginla continued to do what he has done against the Oilers throughout his career, hammering home his seventh of the season past a well screened Dubnyk, courtesy of one Milan Lucic. The Bruins would extend the lead to a field goal before the frame was up, as Edmonton coughed up their league worst seventh short-handed goal against this season.

Another ill-timed pinch from defenceman Philip Larsen, coupled with Jordan Eberle doing his best Sam Gagner impersonation on his way back into his own end, would lead directly to Brad Marchand making it 3-0 in a blink-of-eye. That goal would end Dubnyk’s night after just twenty minutes, as he stopped fifteen of the eighteen pucks fired his way.

Despite staring at the very real possibility of dropping their tenth game on home-ice this season, the Oilers came out firing over the final forty minutes of action. David Perron scored his first of two second period goals to get Edmonton on the board, at which point Luke Gazdic decided to go out and try to shift the momentum in his team’s favour, dropping the mitts with Mr. Lucic.

Gazdic held his own during what was a wonderful tilt and some would argue he actually finished up with the upper hand. That scrap seemed to not only fire up the Oilers bench but also brought the fans out at Rexall Place to their feet and out of their collective slumber. From that moment on, Edmonton was by far and away the better team.

While Perron’s second of the night would get them to within one shot of tying things up, they would get no closer. They did waste a pair of golden opportunities on the man advantage during the third period, the first in which the Oilers #57 was inexcusably left off the power play until the final few seconds, but much of that has to full at the feet of the head coach.

This deep rooted need Eakins seems to have for using both Gagner and Larsen on the top unit, with the likes of Nail Yakupov and Justin Schultz both waiting in the wings, is nothing more than pure idiocy and has already come back to bite him on more than one occasion. That said, from a performance/effort standpoint, there was nothing to really complain about.

As a collective group, the Oilers did not shy away once from the physical style of game teams are generally forced into to playing when facing the Bruins. To steal one of coach Eakins’ favourite phrases, their “compete level” was off the charts last nigh. There were no passengers on that roster.

Be it a smurf like Mark Arcobello, who started hitting guys from the moment he hit the ice…including a couple of healthy runs at Zdeno Chara, or a guy like Jesses Joensuu, who was punished heavily by the Bruins every single time he went near Chad Johnson’s blue paint. In all honesty, this sort of performance it was long overdue.

Eakins decision to juggle his lines for the final forty minutes worked out beautifully, as the trio of Arcobello, Taylor Hall and Ales Hemsky came to life, after watching Gagner, Hall and Yakupov struggle mightily over the opening twenty minutes of action. Subsequently, the Gagner line looked far less over matched playing fewer minutes at even strength and with the addition of a bigger body like Joensuu on the wing.

Same goes for turning to Jason LaBarbera to start the second period. While the veteran tender has had a tough go of things since signing with the Oilers, he has been nothing but a reliable backup for the vast majority of his rather lengthy NHL career. We saw that guy for the first time this season and he played his role perfectly. He may not have been nearly as busy as Dubnyk, especially during the third period, but he made the saves he had to and gave his team a shot at coming back.

At the end of the night, this loss looks no different in the standings as the previous eighteen but it sure feels different. If nothing else, these players should now realize the effort necessary to compete in this league on a nightly basis. They clearly have it in them…they now have to find a way to bring it out on a nightly basis.