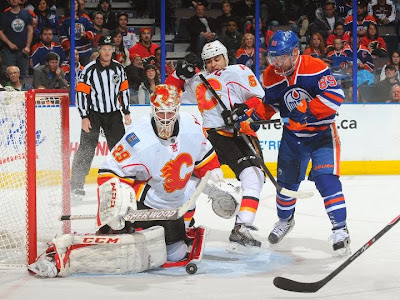 Well so much for this season being the one that the Edmonton Oilers would start dominating the Calgary Flames in their head-to-head matchup.

Despite some last second heroics from Taylor Hall during regulation time, it would be the Flames Jiri Hudler who would play the role of hero on this night, scoring the overtime winner, as the Flames squeaked out a hard fought 2-1 victory over their provincial rival.

Reto Berra turned aside thirty one of the thirty-two pucks fired his way, in earning his just his fourth win on the season, while Devan Dubnyk was the hard-luck loser.

The Oilers #1 netminder was solid in between the pipes from start to finish but as has been the case on many a night on home ice, the run support was clearly lacking.

In what has become a far too regular occurrence of late, the Oilers power play let them done yet again. Despite being on the man advantage on six separate occasions, compared to just two for the visiting Flames, all Edmonton could muster was a measly eight shots on goal.

As per usual, Taylor Hall and David Perron created many of the Oilers offensive chances upfront, as the duo eventually teamed up to get this one into to OT with just over ten seconds to go and Dubnyk on the bench for an extra attacker. Hall’s eleventh of the season could not have come at a more opportune moment, as Dallas Eakins’ side were mere seconds away from being shutout for the fourth time this season , all of which have come on home ice.

After torching the Colorado Avalanche for eight goals on Thursday evening, the Oilers Jekyll and Hyde act returned to Rexall Place on Saturday night. The feast or famine routine has certainly grown old with the masses and it has most certainly cost this team in the standings.

We are now thirty-one games into the season and Edmonton still find themselves in the basement of the Western Conference, three points back of the Flames while having played two more games. While they have started showing signs of improvement in certain areas of their game, they continue to fall back into their old habits on an almost nightly basis.

As a collective group, the Oilers continually pass up on wide open looks to simply get the puck on net, while turning it over with far too much regularity…be it at the opposing team’s blueline or in their own end. Their tendency to cough up the puck led to the vast majority of Calgary’s chances and what turned out to be the eventual game winner.

On surface, watching Justin Schultz whiff on his attempt at corralling the puck prior to Hudler’s winner, which re-directed off both Jordan Eberle and Ryan Nugent before skipping over the youngster’s stick, was more than a little frustrating. That said, the more troubling part of the entire sequence was not the goal itself but rather watching Edmonton fail to move the puck out of their own end on numerous occasions prior to the disastrous blunder.

On a night in which they unquestionably had the puck on their sticks more than the opposition, they did absolutely nothing with it. When it came to generating quality scoring chances, it was not as though the Oilers pounded the Flames into the ice. Berra wasn’t really forced into making many of your so-called highlight reel saves, outside of a brilliant , albeit somewhat lucky, pad stop off Mark Arcobello in the second period.

One could actually argue that Dubnyk had the tougher night, as the Flames had a number of odd man rushes and generated many chances off the aforementioned Oilers turnovers. There did not appear to be nearly as much chaos around Dubnyk’s net but that was do to the fact he gave up next to no rebounds.

At the end of the day, the Edmonton Oilers are going to have their challenges over the final fifty-one games of the 2013-14 season. Of that there is no doubt. Having said that, dropping points to teams like the Calgary Flames should not be happening...especially not in their own barn.
Posted by Oil Drop at 12:03:00 pm