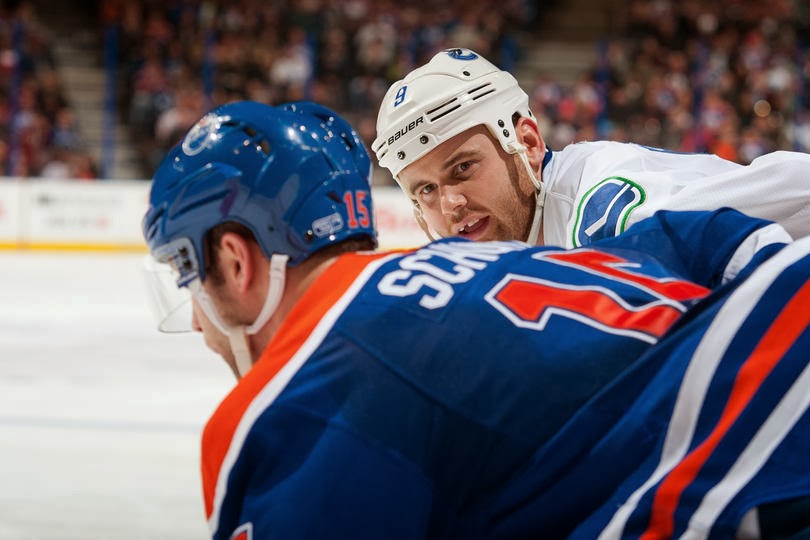 Since then the Oilers have faced Kassian’s Vancouver Canucks on three separate occasions and after last night’s 2-1 loss, they have not only dropped all three matchups to their Pacific Division rival but have yet to respond, in any real fashion, to the twenty-two year olds sticking swinging ways.

As if being foiled by a brilliant performance from Roberto Luongo wasn’t enough, Kassian added insult to injury by scoring what was the eventual game-winner.

It was an evening in which Dallas Eakins’ crew probably deserved a better fate on the scoreboard but one in which they allowed an opportunity to send a message slip through their fingers.

While the Canucks jumped out to an early lead on the first goal of Kellan Lain’s NHL career, thanks in large part to an awful rebound from Ben Scrivens and some terrible defending from Mark Arcobello and Nick Schultz, the Oilers got better as this one moved along. Unfortunately for them, they weren’t having much luck in trying to get a puck behind the Canucks starting netminder.

Luongo did get some help from his goal posts, as Edmonton nailed three off the iron, but he made numerous eye-popping stops as the evening moved along. Though the best of the bunch was an absolutely ridiculous blocker save off Jordan Eberle during a second period Oilers power play. The Canadian Olympian was at his very best and frankly looked unbeatable.

To make matters worse, Kassian’s long ranged wrist shot would find its way behind Scrivens at the eight minute mark of period two, as Ryan Smyth inadvertently re-directed the puck past his own netminder. It was definitely a tough break for the Western Conference cellar dwellers but with more than half the game still to go, Edmonton had to have felt they were still in it.

That’s all well and good but at some point a team has to pick their spot and last night should have been that time. Playing in their own barn, already down a pair of goals and facing a red-hot goalie, one would have thought this would have been an ideal moment for Luke Gazdic or someone on the Oilers bench to pay as visit to Mr. Kassian. Instead, Eakins decided to try and go for the win and two points that are essentially worthless.

Believe me, I get it. This team has done so much losing this season that anytime they can take a couple of points from a playoff team, especially a division rival, they would be crazy to not jump at the opportunity. However, when the second intermission hit and the Oilers were still down 2-0, the attention should have shifted to the Canucks #9.

Gazdic was given a pair of shifts in the third against Kassian but looked as though he had instructions to engage only if he had a willing dance partner. Not surprisingly, the former first round pick of the Buffalo Sabres would turn down each and every invitation to drop the mitts. Instead of forcing him into a situation in which he had no choice but take on whatever came his way, the Oilers allowed him to keep doing his thing.

As the period progressed, both Kassian and Kevin Bieksa started to take liberties and did so with a smile on their face and chirping away as always. Yet the focus remained on those two points. Eberle would finally get Edmonton on the board with exactly five minutes to go but in the end would it was all for not. There would be no equalizer coming.

As things currently stand, the Edmonton Oilers have two games remaining on their schedule against the Vancouver Canucks. They pay a visit to Rogers Arena next Monday and close out their regular season campaign on home ice against the Canucks on April 12th. The chances of the Oilers getting their pound of flesh on the road seems unrealistic, as does expecting Zack Kassian to actually dress for the season finale at Rexall Place.

Make no mistake, last night was an opportunity lost and one this group will likely not get a chance to rectify this season. Like everything else that has gone wrong for this club during what has been a forgettable 2013-14 campaign, let’s hope they use it as a learning lesson and ensure they never allow it to happen again.