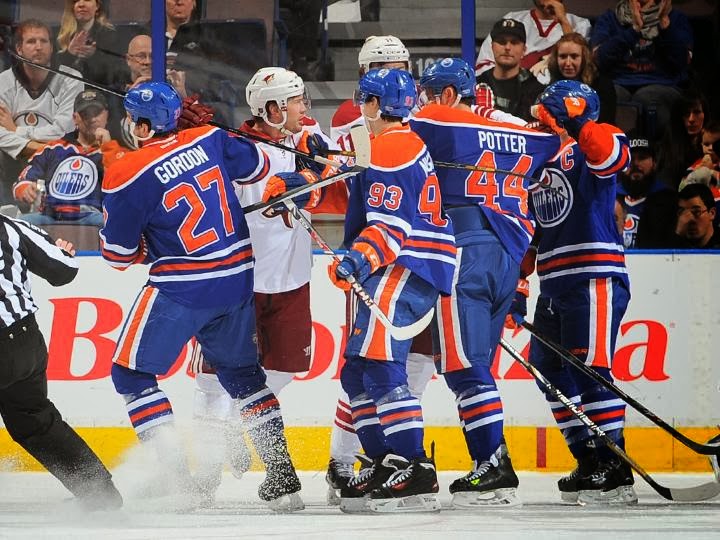 On an evening in which the line of Boyd Gordon, Matt Hendricks and Ryan Jones were by far and away the Oilers best, it would be a four minute stretch late in the first period that would prove too much to overcome for the worst team in the Western Conference.

The quartet of Mikkel Boedker, Radim Vrbata, Derek Morris and Mike Ribeiro managed to put pucks in behind Ilya Bryzgalov, after the Russian netminder looked to be zoned in over the opening fourteen minutes of play.

Those four goals coupled with a thirty-six save performance from Mike Smith helped Dave Tippet’s crew snap a two game losing skid and pull them within four points of the eighth place Minnesota Wild. Goals from Hendricks, David Perron and Ryan Nugent-Hopkins would get the Oilers close but at the end of the night, the difference would once again be special teams.

Did Edmonton have the best of starts? Not particularly but they have had far worse over their previous fifty-two outings. While the Coyotes were rather fortunate to be up by four, the Oilers did have their chances but did not capitalize. Not only did they come away empty-handed on five power play opportunities, including a brief two-man advantage to start the second, they also allowed Phoenix to score a power play marker of their own.

The combination of not getting that extra save from their netminder prior to heading in for the first intermission and their inability to produce with the man advantage killed this group. It wasn’t as if Edmonton played an absolutely dreadful opening period and half. However, they did have a handful of brain cramps and as per usual, they would prove rather costly.

That said, there really wasn’t much to complain about. The effort was good but the result wasn’t what anyone was hoping for.