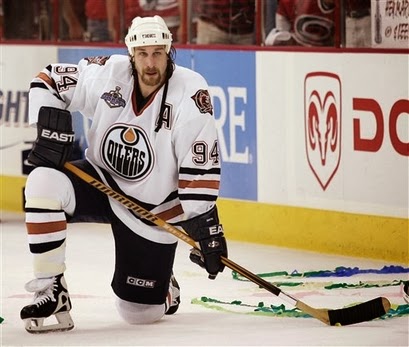 
The thirty-seven year old will always be a fan favourite but who’s kidding who. The writing has been on the wall for much of the year but unlike most fans, Smyth isn’t blind to what has become blatantly obvious. As much as this group has struggled, #94 has been relegated to fourth line duty when the team has been healthy and with more changes coming prior to  the start of next season, the chances of the former sixth overall pick remaining in Edmonton are pretty much non-existent.

In all honesty, did some people actually believe the club had any intention of bringing Smyth back? While he has been far better during the first half of the Oilers current campaign, he was downright awful over his previous 80 or so games in Orange and Blue.

He is no longer a top six forward and he most certainly isn’t the type of player his general manager is looking to add to his bottom six forwards. I have little doubt MacT approached Smyth long ago about moving him to a contender and thankfully, Ryan appears to have taken his GM up on that offer.

Trading away the 1,240 game man won’t help Edmonton improve their roster in any way, as he likely has little to no trade value. That said, there will be more than a few teams that would be interested in adding a guy like Smytty for a playoff run in a limited role.

Craig MacTavish is fully aware of this and will do his very best to accommodate the long time Oiler in any way possible. In my mind, this organization owes it to the player to give him a chance to go out on top and conversely, I would say the player should give the organization every opportunity to cut ties in as quiet and unassuming manner as possible.

It has been one hell of a ride for the kid from Banff, Alberta but the time has come to close the book on that chapter of Oilers History and focus on what lies ahead. From here on out, this organization has to do whatever is necessary to improve the product on the ice and having Ryan Smyth around for another year would do nothing but delay that from actually taking place.
Posted by Oil Drop at 10:43:00 am