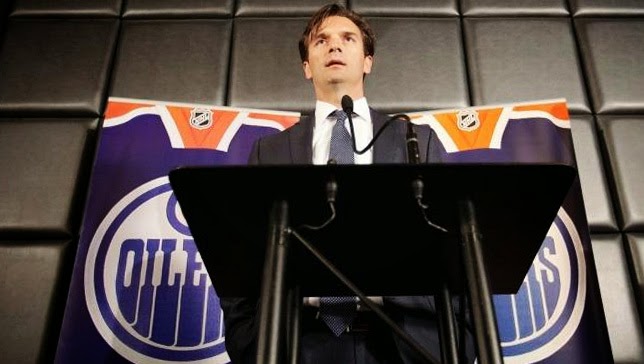 While reshaping an entire organization doesn’t happen overnight, is expecting the Oilers to have some semblance of the type of team they want to put together, so wrong? In my mind it isn’t and to be perfectly honest, it could be the single biggest reason why this organization continues to spin their wheels year after year.

Think about it…does this team truly have an identity? For the longest time all we have heard about is how Edmonton was trying to use the Chicago Blackhawks model of building their squad around a core of youngsters who played a high octane game.

In drafting the likes of Jordan Eberle, Taylor Hall, Ryan Nugent-Hopkins and Nail Yakupov, one would think pushing the pace upfront would be this team’s calling card. Yet here we sit…four years after the organization selected Hall with the first overall pick at the 2010 NHL Entry Draft and the current head coach doesn’t think he has a team that can play an offensive styled game.

So again, I ask the question…what is their identity? If Dallas Eakins believes he doesn’t have an offensive team, than what the hell does he have? While general manager Craig MacTavish may not have been the one running the show back in 2010, this franchise decided to bring in players who played a certain style of game and diverting away from that plan now would be idiotic.

Which means MacT has two options on his plate and having his head coach try and change the way these kids play and think the game isn’t one of them. Do they need to mature into better all-around players? They most certainly do but not at the expense of doing what they were drafted to do…create offence.

The obvious option would be bringing in better players who could help these kids not only develop into better NHLers but also assist them in finding that elusive identity. MacT did well in acquiring David Perron from the St. Louis Blues last summer but they are still more than a few pieces away from turning this thing around. Option #2…trade away some of the young talent and bring in the sort of players both the coach and management team are comfortable moving forward with. It is really that simple. There is no grey area here.

You are either an offensive minded team or you are not...end of discussion. If the goal is to go the Chicago route and become more of a puck-possession based side, than go out and do it and see where it goes. However, if that isn’t really what the current regime wants, change it up and go in whatever direction necessary.

There are different ways to go about putting together a successful NHL organization and at the moment the Edmonton Oilers are at the opposite end of the spectrum. Can’t someone just make a decision already? Building around the pieces they already have in place would appear to be the wise approach to take but listening to the GM and head coach talk about the sort of team they want this group to turn into, I am not so sure they would agree with me.

One way or another, a decision has to be made and it needs to be made sooner rather than later.
Posted by Oil Drop at 7:14:00 am