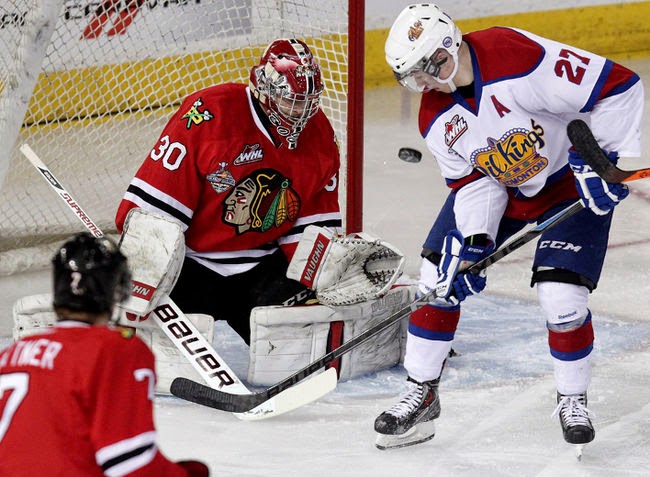 After following behind early on in the opening three games of the series, the Oil Kings managed to not only keep the Winterhawks from hitting the scoreboard inside the opening three minutes of action but also kept things scoreless through twenty. While both Tristan Jarry and Corbin Boes were solid in between the pipes, neither one was called upon to make that five-bell stop early on. Unlike the previous three games, there was no back and forth fire wagon hockey.

From the moment the puck was dropped, Derek Laxdal’s crew looked like the team that had posted a 9-0 record on home ice during the post-season. While Edmonton could usually outscore their opponents at will during much of the regular season and throughout the first three rounds of the playoffs…that was never going to be the case against Portland.

More often than not, Mike Johnston’s side has been the side that dictates terms, be it at home or away, but that hasn’t been the case at Rexall Place. Outside of the odd stretch of play, it has been the Oil Kings who have carried play. The Winterhawks rarely if ever look out of sorts but that has become the norm for the defending champs upon visiting the Alberta capital.

Just as they did roughly 24 hours earlier, Edmonton came out firing in period two and were rewarded for their efforts with a go-ahead marker off the stick of Edmonton Oilers prospect Mitch Moroz. The goal obviously marked the first-time the Oil Kings had opened the scoring in the series and you just got the feeling that one goal might be all that was needed was needed for the Eastern Conference champs.

Through forty minutes of play, Edmonton were by far and away the superior team and with Jarry looking like his regular season self, the Winterhawks looked to be in tough. As good as the guy wearing #30 in white looked, it was the team’s overall play in their own end of the rink that started to finally resemble the sort of game fans had grown accustomed to seeing from their squad at home.

Captain Griffin Reinhart continued to impress along the Oil Kings blueline, playing a starring role in shutting down the WHL’s most prolific offensive side. At this stage of his junior career, the big man rarely if ever makes a mistake and even against a team as good as Portland, he appears to be on a completely different level. The former fourth overall pick of the New York Islanders has not only been coach Laxdal’s best player through the opening four games…he has arguably been the best player for either team.

That said, the Winterhawks entered the final frame just one shot or lucky bounce away from giving themselves a real shot at heading home with a commanding 3-1 series lead. Unfortunately for them, Curtis Lazar had other ideas. Despite having not had his usual impact over the first eleven periods of the series, the Ottawa Senators first rounder decided to take things over in period three.

Clearly the kid recognized the magnitude of the situation and adjusted his intensity level accordingly. Be it the overall tenacity he brought to the table during the final twenty or the countless number of scoring chances he helped create…Lazar had no intention of allowing this team to blow their one goal cushion.

He would ultimately seal the deal at the 6:17 mark, banging home a nifty little feed from Reid Petryk for his eight of the post-season before crashing into Boes and knocking the Portland goal ajar. The on ice officials went upstairs to review it but there was no question it was a good goal and just like that, the Edmonton Oil Kings found themselves back on level terms with almost all the momentum on their side heading back to Portland for Game Five on Friday night.
Posted by Oil Drop at 7:16:00 am