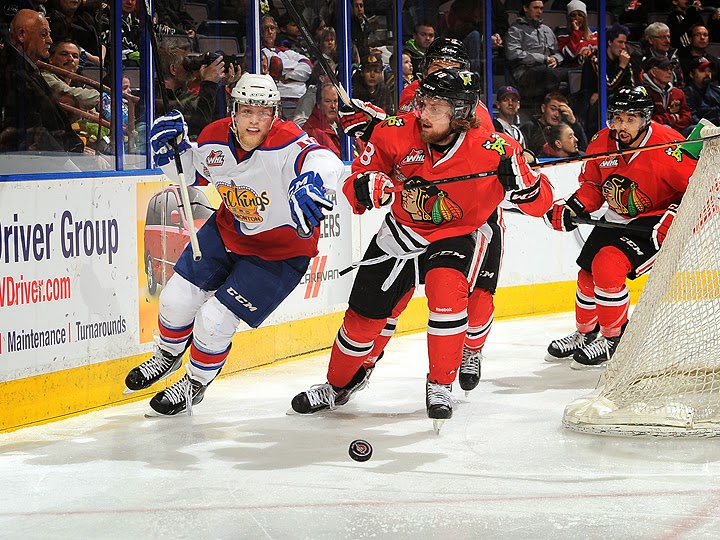 Edgars Kulda played the role of hero scoring the game-winner and netminder Tristan Jarry rebounded from another shaky opening twenty minutes, stopping the final thirty-five shots he faced. While Edmonton Oilers prospect Mitch Moroz was the lone skater to register a multi-point night for either side, with a pair of assists, it was Henrik Samuelsson who picked this team up when they needed it most with his finest performance of this year’s playoffs.

For the third time in three games it took the Winterhawks less than three minutes to grab the lead as Chase De Leo beat Jarry high to the glove side, on a shot Edmonton’s starting netminder would love to have back. It was the start the Oil Kings were desperately trying to avoid and exactly the one Mike Jonhston’s side was hoping for.

Unfortunately it would only get worse from there, as defenceman Mathew Dumba would find the back of the net for the second time in three games at the 3:30 mark, making it two goals in fifty-four seconds and suddenly you could hear a pin drop in Rexall Place. Two goals on back-to-back shots and Edmonton were back in chase mode.

To their credit, they continued to push over the final sixteen minutes on the first and carried much of the play but were unable to sneak one past Portland’s Corbin Boes, who was perfect in between the pipes for the visitors. The shot clock may have read 19-10 Edmonton but all that really mattered was that two goal deficit.

It was definitely a tough pill for Laxdal’s side to swallow but with the very real possibility of going down three games to none staring them squarely in the face…they had no time to feel sorry for themselves. It was now or never. They had to bring it…and bring it they did.

After coming away empty-handed from a pair of first period power plays, Samuelsson wasted little time in notching his third of the series on power play number three…scoring all of eighteen seconds after Portland’s Taylor Leier took a seat in the sin bin. From that moment on, the Oil Kings started to come in waves and the visitors were doing nothing more than holding on for dear life.

They were handed a lifeline at the 8:51 mark when defenceman Blake Orban was whistled down for high-sticking but the defending WHL champs came up with nothing on their first power play of the evening and Edmonton would make them pay all of thirteen seconds later, courtesy of a highlight reel goal from Luke Bertolucci and a great lead pass from Mads Eller.

Prior to undressing Boes for his sixth of the post-season with an absolutely gorgeous move on a breakaway, the Oil Kings forward was clearly dumped by Dumba just outside the Hawks blueline and yet there was no penalty coming. That mattered little to Bertolucci, who instantly sprang back to his feet and proceeded to send the Rexall faithful into an all-out frenzy. Just like that we were back on level terms and the momentum was finally on the Eastern Conference champs side.

It appeared as though Edmonton had grabbed their first lead of the series mere moments later, as Samuelsson knocked home a loose puck for his second of the frame, but the goal was waved off after replay officials deemed the Phoenix Coyotes first round pick had intentionally re-directed the puck in with his skate. A tough break for sure but just like intermission number one, all that mattered was the scoreboard.

Give Portland credit, they came out with what was easily their best period of the night in the third as both teams traded chances, with the Winterhawks benefitting from multiple chances on the man advantage. . After his early struggles, Jarry settled down and though he didn’t look his usual rock solid self, the kid did manage to come up with a pair of huge stops early on. Leier broke in all alone after defenceman Aaron Irving blew a tire in the slot but the Oil Kings starter turned him aside with a monster arm save at the three minute mark and he would take it a step further four minutes later, stoning Brendan Leipsic with splendid pad save on a partial break.

Those two stops would prove to be game, if not series, savers as Kulda would scorer the winner with 6:47 left to go, banging home a lovely pass from Mitch Moroz , and sending what was a rather pedestrian crowd of 6,799 at Rexall Place into hysterics. While the building may not have been full, those who did decide to show up more than held up their part of the deal…doing all they could to help this team back from what looked to be certain defeat at the three and half minute mark of period one.

Don’t look now but we may have a series on our hands and with Game Four set to go on Wednesday night, Edmonton is suddenly in the driver’s seat and will look to send this one back to Oregon with each team holding serve on home ice and another Western Hockey League Final classic on our hands. That said, my guess is we say a more complete effort from the Portland Wintehawks…which should make for one hell of a hockey game.
Posted by Oil Drop at 7:04:00 am