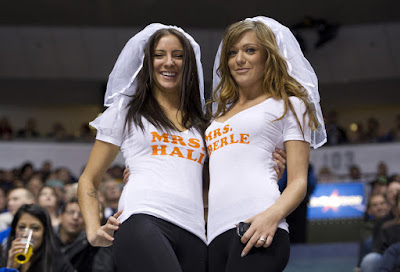 Not only was last night Ryan Nugent-Hopkins first regular season game in his home province but it was also a chance for two young ladies to try and win over the Edmonton Oilers other two young star forwards. Not sure if the two fazed the visitors but it certainly had no effect on the Vancouver Canucks. They seemed determined to come out and rebound from a less then stellar performance in their last game, before the Christmas break. An undermanned Edmonton side were simply no match for the red hot Canucks, who defeated their division rival by a score of 5-3, in what has become a yearly event for the two sides. Vancouver now sits atop the Northwest Division while the struggling Oilers are comfortably nestled in the division cellar.

Vancouver came out like gang busters and had the Oilers pinned in their end from the opening whistle. They were rewarded with an early power play opportunity and while Edmonton was able to kill off the man advantage, the Canucks would open the scoring seconds after the Ladislav Smid interference minor would expiry.

Andrew Ebbett would score his first of two on the night, when a Chris Higgins shot deflected off Oilers call up Alex Plante and then Ebbett and past a surprised Nikolai Khabibulin, to give the home side the early lead. Just over five minutes later, the Canucks would go up a pair on a play that frankly, never should have happened.

Daniel Sedin would put Vancouver ahead 2-0, after snapping a quick feed from brother Henrik past Khabibulin. Problem being, that Daniel clearly picked Edmonton forward Lennart Petrell in front of the Oilers goal and it somehow how was missed by both officials...one being all of ten feet away from where the infraction occurred. Khabibulin immediately went to the referee to voice his displeasure with the missed call but it fell on deaf ears. It was a brutal non-call and changed the complexion of the opening period but that is the fault of the officiating crew, not the Canucks.

Vancouver would push the lead to 3-0, when Ebbett buried his second of the period on a two-on-one break. For a reason only known to himself, defenceman Corey Potter decided to pinch at the Canucks blueline which allowed Ebbett and Jannik Hansen to breakout on the odd man rush. Hansen slid a cross ice pass over to a driving Ebbett, who one-timed a shot past a fully stretched Khabibulin. After twenty, the two teams looked like the belonged on different sheets of ice...but an ill-advised hit by Canucks forward Dale Weise, would give the Oilers an opportunity to get back into the game.

Just past the eight minute mark of the second, Weise decided to take a cross ice run at defenceman Alex Plante and absolutely destroyed the Oklahoma City blueliner into the boards. While the hit was shoulder to shoulder, the rugged Canuck forward targeted the Oiler rearguard and took a cross ice run at him. The youngster was sent flying face first into the glass, was cut open and did not return. Weise was assessed a five minute major for charging and given a game misconduct and in my opinion, it was just. Having said that, I can't see the league disciplining Weise any further. The call on the ice was the right one and it was a turning point in the game.

Jordan Eberle would score his sixteenth of the season, with just under three minutes left in the major, after banging his own rebound past goaltender Roberto Luongo. After Taylor Hall gained possession in the Vancouver end, he was able to find Nugent-Hopkins, who quickly hit Potter for a one-timer from the point. Luongo made the initial stop and manged to stone Eberle on the rebound but the talented sophomore would not be denied on his second crack. Edmonton had life and plenty of time to get the lead down to one but another poor decision by Potter, allowed Vancouver to quickly restore their three goal lead.

Forty-five seconds after the Eberle goal, Kesler was lugging the puck deep in the Oilers end with Ryan Smyth doing little to force him, so the talented centre cut towards the net but was cut off by Smyth and forced to the corner. Inexplicably, Potter decided to chase the two into the corner and left the front of net unattended. Kesler promptly delivered the puck to the goal mouth, where a hard charging Alex Burrows tapped the short-handed marker past the stunned Oilers netminder.

To the Oilers credit, they would get the lead back down to two, when Ryan Smyth knocked in his fourteenth on the campaign, just forty-two seconds after the Burrows goal. Edmonton still had over a minute left on the man advantage but were unable to score a third goal on the five minute power play. Thanks to the major penalty, the Oilers were back in it, down only a pair, heading into the final frame.

Just over three minutes in and with both sides playing four-on-four, it was Kesler who would, once again, start the play that would lead to the Canucks fifth goal of the night. Kesler carried the puck deep into the Edmonton zone but was forced into the corner by both Jeff Petry and Tom Gilbert. As the Vancouver centre spun off the pressure, he manged to hit Alex Edler at the point and all seemed under control. Unfortuantely for the Oilers, the two defencemen rotated in their coverage while the two forwards, Anton Lander and Sam Gagner, stood at the point covering open air instead of a blue shirt. One quick pass from Edler to a wide open Burrows, opened the middle of the ice up and the feisty winger fed a charging Kesler for a lovely tap in goal. Just like that, it was 5-2 and this one was all but over.

Edmonton did manage to get their third goal on the night, when Eberle intercepted the Canucks clearing pass behind the Vancouver net and set up Corey Potter for a blast that found it's way past Luongo. The shot appeared to hit Ryan Jones on the way in but the goal was credited to Potter. The Oilers would get no closer and they start their season high seven game road trip on a losing note.

The Oilers were missing both Ales Hemsky and Ryan Whitney from their lineup and this team is not deep enough to contend with a team like the Canucks, when the are missing key players. With the club off until Thursday, one would think that Hesmky will be ready to go and recovered from his sinus infection but Whitney is another story all together. The defenceman missed last night's game because of tendinitis in his surgically repaired ankle...the same ankle that has been giving him problems all season long. With his ankle still hurting, the time has come for the blueliner to take some time to rest and hope it gets better. At this point, that seems unlikely and the Oilers might have to seriously consider shutting down their star defenceman for a second straight season, at the thirty-five game mark.