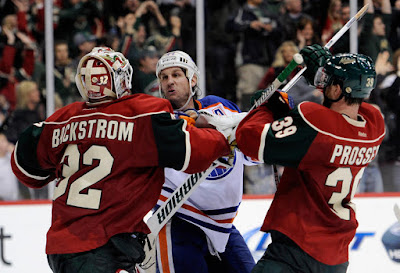 In what was a hard fought and chippy affair, the Minnesota Wild managed to end their season high eight game losing streak by defeating the Edmonton Oilers by a score of 4-3. Edmonton now sits at 0-2 to start their season high seven game road trip and have a record of 2-8 in their last ten games.

The Oilers came out fast and managed to open the scoring when Taylor Hall continued his strong play since returning from his shoulder injury. Hall buried a slick cross-ice pass from Jordan Eberle, just 1:24 into the contest, to get Edmonton off on the right foot. The assist extends Eberle's current point streak to six games and marks the seventeenth time in the last twenty games, that the sophomore winger has registered at least one point. It was just the start the visitors were looking for but for a reason known only to this clubs coaching staff, the kid line saw roughly four minutes of ice time in the first. In fact, the only Oiler forwards that played less then a Hall in period one were Ben Eager and Darcy Hordichuk.

Edmonton had the opportunity to grab this game by the throat but that never materialized because coach Renney and company were simply unwilling to play the kids in four-on-four situations. Teams tend to play their best players when both sides are playing four aside but Edmonton looks at these situations as if they are short-handed and hence the youngsters don't see the ice.

Not surprisingly, it was in one of those four-on-four occasions that the Wild would tie things up and it was their best player, Mikko Koivu, who did the damage. The talented centre took a drop pass at the Edmonton blueline and skated, untouched, into the Oiler zone and snapped a perfectly placed shot past netminder Nikolai Khabibulin. The teams went to the dressing room with the game knotted at one, in what was an entertaining period of play.

Three and half minutes into the second,  Edmonton was given a four minute man advantage when Koivu caught Shawn Horcoff with a high stick  The visitors had control for most of the power play but were unable to take the lead. Ryan Nugent-Hopkins would be assessed an unsportsmanlike conduct penalty with just under a minute left in the power play, after asking officials how they missed an earlier high stick on Hall, that left the star winger spitting blood.

The Wild would take the lead just past the midway mark of the period when Jarod Palmer scored his first NHL goal, on a couple of miscues from Oiler defenders. Jeff Petry was caught just outside the Oiler blueline after turning the puck over, which allowed Palmer to walk in alone and beat Khabibulin high on the glove side. Corey Potter didn't help his partner out, when he let Palmer skate in as he thought he was facing an apparent two-on-one. Potter had the opportunity to step up and force the Minnesota winger but instead he did nothing and Edmonton was trailing for the first time.

Nineteen seconds later, Oiler killer Pierre-Marc Bouchard made it a two goal lead. Theo Peckham allowed Bouchard to sneak in him behind him at the Edmonton blueline and the Wild centre snapped a quick wrist shot past a stunned Khabibulin to make it 3-1. The Oiler netminder was not set for the shot and it somehow found it's way to the back of the net. Not a good goal on the veterans part.

Less then a minute later, Hordichuk would drop the mitts with big Matt Kassian in what was a very one sided affiair. Though Hordichuk was tossed around like a rag doll by the hulking Minnesota tough guy, the tussle seemed to spark the visitors. That extra jump resulted in Edmonton cutting the lead to one, when Ladislav Smid scored his third of the season.

With Taylor Hall being doubled shifted on the fourth line, the talented winger teamed with Ben Eager to gain control of the puck deep in the Wild zone. Hall then sent a beautiful cross-ice pass to a streaking Smid, for an easy backdoor tap in. Just like that the lead was back down to one but less then a minute later, the home side restored their two goal bulge.

On what was a bit of an unlucky play, Marek Zidlicky's wrap around attempt ricocheted directly to Dany Heatley for an easy tap in goal. It was a tough sequence for Petry, who had the puck hit him on the backside on the Zidlicky wrap around and then he lost his mark in Heatley. That made it 4-2 for Minnesota heading into the final frame.

The third period opened with round two from Hordichuk and Kassian. While the Oilers tough guy managed to get in  a couple of early shots, the result was the same as the first go around. Once again, the tilt seemed to spark the Oilers who easily played their best period of the night. Shawn Horcoff would cut the led to one, when he scored his first in thirteen games at the 6:40 mark of the third. Much like the Bouchard goal on Khabibulin, the Horcoff wrister somehow eluded Niklas Backstrom but the Oilers and their captain weren't about to give it back.

Edmonton carried the play for much of the third but were unable to find the equalizer, despite having a six-on-four advantage for the last minute and half of the game. They had chances but couldn't find a way to get the puck past Backstrom.