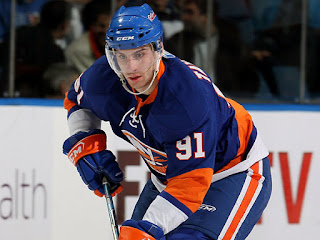 The Oilers won't be changing anything upfront, even though Ales Hemsky and Eric Belanger are both battling sinus infections. The Horcoff line was very good against the Wild, with Hemsky being the best of the bunch. Taylor Hall has been the best Oiler since returning from his shoulder injury and he seems to be hitting his stride. With Hall, Ryan Nugent-Hopkins and John Tavares all playing in this afternoon's game, we will be watching the last three first overall selections in the NHL. All three are great players but all three are different types of players and don't be surprised to see the three try and out do each other...especially former Team Canada teammates Hall and Tavares.

Andy Sutton returns from his eight game suspension just in time to face one of his former teams. With Sutton drawing back in, you would think that Colten Teubert will find himself in the pressbox. Lets hope that the addition of the hulking defender will allow the coaches to cut back minutes that some of the blueliners have been playing.

After coming in for the third period against Minnesota on Thursday night, Dubnyk looked as solid as he has at any point this season. Add to that, two so-so performances for Nikolai Khabibulin and it's no surprise that Devan will get the start in Long Island. Outside of his strong performance in the season opener, whenever Dubnyk has been given an opportunity this season, he has dropped the ball. Dubnyk has to seize this chance and prove that he can take on a bigger role during the second half of the season.