Will Khabibulin Be Available At Trade Deadline 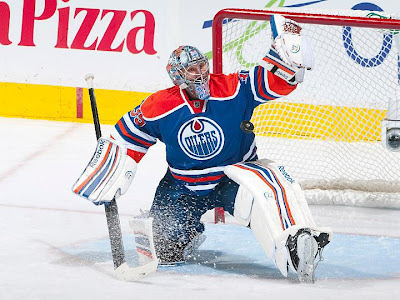 With the midway point of the season just around the corner and the Edmonton Oilers mired in a slump that has seen them fall to thirteenth place in the Western Conference, the time has come to look towards the upcoming trade deadline and try and predict what pieces of the puzzle Steve Tambellini would be willing to move. More often then not, the players that are brought up most in trade talks are Ales Hemsky, Sam Gagner and Linus Omark. All three could possibly be moved by the deadline and I would say there is a good chance that two of three will have a new home by the deadline. That being said, the Oilers might just have a card to dangle to teams that are looking to make that move that will put them over the top. That card being goaltender Nikolai Khabibulin.

Heading into this season, it would be safe to say that ninety-five percent of hockey fans and media felt that the Oilers star netminders career was all but over. While I was fairly confident that the former Winnipeg Jet would rebound, many simply pointed to his god awful numbers last year and jumped to the conclusion that the gas tank was empty. While Khabibulin will be turning thirty-nine years old come mid-January, the veteran puck stopper seems to be far from washed up.

After his amazing start to the season, the numbers have some what come back down to earth but he is still among the league leaders and it could be argued, that the Russian netminder has been the best goalie in the league this season. When you take backups out of the equation and look at all 30 teams starting goaltenders, it's hard to find a better body of work. Among starting goaltenders, he sits sixth in the league with a 2.14 GAA and .927 SV% and he has put up those numbers playing in front of what is one of the weakest groups of defencemen you will find in the league. If you look at other teams that are weak on the backend, none of them have goalies that are among the league leaders...only the Oilers do. Add to that, the high grade chances that Edmonton gives up on a nightly basis and it is hard not to marvel at the performance of the former Tampa Bay Lightning stand out. Khabibulin has been nothing short of brilliant for the Oilers this season

Having said all that, this team badly needs to upgrade their backend in order to legitimately compete for the playoffs this season and all signs are pointing towards that not happening. With that being the case, this organization has to seriously consider moving pieces that won't be part of the long term solution but the situation isn't as cut and dry when it comes to Khabibulin. While long term he isn't the answer, is he still worth keeping around in helping with the transition over the next eighteen months? Or do they look to move him at his peak? Khabibulin does have one more year left on his deal but contrary to what people say, his $3.75 million ticket is far from an over payment. When you combine the experience he brings to the table with the level his game is currently at, his contract is actually a bargain. He would definitely help Edmonton if he remains an Oiler and it would allow Devan Dubnyk time to relocate his game. That being said, at some point Dubnyk has to prove he can string together quality starts in succession or the Oilers will have to look outside the organization for the clubs next starting goalie.

It's tough to look into the future and see what the market will be for goaltenders at the deadline but I have feeling teams that are looking to upgrade their goaltending because of in jury or poor play, will definitely be putting in a call to Tambellini about the former Stanley Cup winning netminder. The market can sometimes be soft for goaltenders at the tradeline but that's because none of the elite ones are ever available but that may change if Edmonton were to make Khabibulin available. Be it a top team that suffers an injury to their starter or teams like a Winnipeg or Tampa Bay, where a goaltender like Nikolai could be the difference between those teams making the playoffs. It's a tough call for the Oilers brass to make but it is a decision that needs to be made.
Posted by Oil Drop at 7:22:00 am