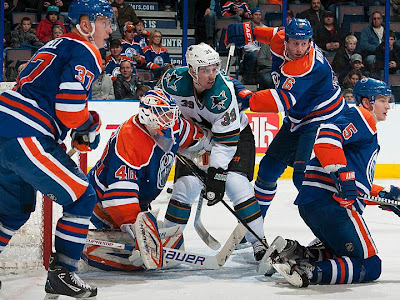 After yet another less then stellar performance on home ice, Edmonton Oilers head coach Tom Renney had seen enough and decided to call out his players, after many decided to simply mail it in against the San Jose Sharks. Last night's 3-2 loss was another low point for a struggling Oilers side that is playing out the string. San Jose's Logan Couture scored the winner early in the third for a Sharks team that are in desperate need of two points on a nightly basis and now sit just one point out of eighth place but have three games in hand on the Colorado Avalanche.
Things did not start off well for the home team when Torrey Mitchell snapped his eighth of the season, on an opening shift that Sam Gagner would like to forget and a goal that netminder Devan Dubnyk would love to have back. Gagner was running around his own end for the entire shift and let his mark in Mitchell crash the net and knock a loose puck past a confused Oiler goaltender. With the puck ricocheting around the goal crease, Dubnyk lost sight of the puck and actually found himself facing the end boards only seconds before Mitchell's opening goal and was never able to recover. Not exactly a great way to start things off.
With the teams playing four aside, Edmonton would tie things up courtesy of some shotty goaltending from Annti Niemi and a rocket off the stick of Ryan Whitney. A quick outlet pass from defence partner Nick Schultz, found a streaking Whitney who carried the puck across the San Jose blueline and unleashed a bomb past a surprised Niemi. While the shot came up on the Sharks netminder in a hurry, that's a shot that he simply has to have.
Near the midway point of the second period, Edmonton had a great chance to take the lead when Whitney found a hard charging Taylor Hall. The pass sprung the second year Oiler and Ryan Nugent-Hopkins on a partial two-on-one break but Hall's pass didn't connect with RNH.  As the puck went into the corner, the Nuge was drilled form behind by the Sharks Douglas Murray and into the Sharks net but somehow, there was no penalty on the play.
A couple of minutes later, San Jcse would get two great chances but Dubnyk was up to the challenge. The Oiler netminder made a nice save off Murray's point blast and then made a brilliant pad save on T.J. Galiardi rebound attempt. Moments later, Hall would be whistled down on what was a questionable tripping call on Jason Demers and the San Jose would make them pay.
It took the visitors all of seven seconds for Joe Thornton to deposit a quick feed from Patrick Marleau past a helpless Dubnyk and regain the lead. It  was almost to easy for San Jose on the man advantage. While it took them only seconds to pot the go ahead goal, it seemed like the Oilers didn't even have penalty killers on the ice.
Three minutes later, Hall would make amends for his penalty by knotting things up on a wonderful individual effort. After blocking Brent Burns point shot, Hall pushed forward, corralled the loose puck around centre ice and took it to another gear. Taylor looked like a speed skater heading up  ice with his arms flailing, as he accelerated and easily separated from Burns and Dan Boyle before beating Niemi on the glove side with a a quick snap shot, to tie things up one more time.
Late in the second period, a dead tired Linus Omark tried to clear the puck out of the Oilers end and inadvertently shot the puck over the glass at the 19:12 mark. Unfortunately for the talented winger, he was assessed a two minute minor for delay of game and it would turn out to be a costly miscue.
For the second time in three periods, Edmonton would allow San Jose to score in the early going when Couture redirected Dan Boyle's point shot and handcuffed Dubnyk. The goal came at the thirty-eight second mark and gave the Sharks their third lead of the night and the second year forward twenty-eight goals on the year.
The rest of the way, the Oilers mustered very little and outside a handful of forwards looked almost disinterested the rest of the way. A scenario that didn't sit well with many players and infuriated the head coach. Who let loose during his post game press conference.
Tom Renney's Post Game Press Conference
Posted by Oil Drop at 11:39:00 am