It Would Be Wise To Keep Renney Around 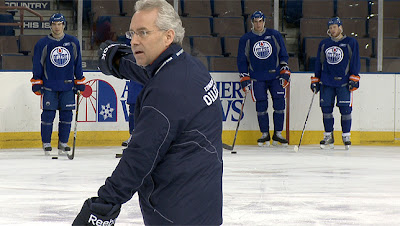 As the 2011-2012 campaign draws to close, the Edmonton Oilers are staring at a sixth consecutive season without post season play. This is a franchise that qualified for the playoffs in their first thirteen years in the NHL, reaching six Stanley Cup Finals and coming away with five Championship banners that proudly hang from the rafters at Rexall Place. Since then the hockey gods have not been kind. Over the past eighteen years, Edmonton has managed to play meaningful games beyond early April on only seven occasions...a stat that doesn't sit well with this organization or their legions of supporters. However, in the eyes of most experts this club is headed in the right direction. With that being the case, the Oilers have a tough decision on the horizon. At the end of this season, the contract of head coach Tom Renney expires and this organization will have to decide what their next move will be. Do they resign the man that was brought in to primarily help mold Edmonton's many young prospects or do they part ways and look to someone else to lead this team back to  prominence? The answer may seem obvious to many but it may not be as clear as some think.

In two years behind the Oilers bench, Renney has managed to guide this team to a 30th place finish and what appears to be, another bottom five finish. Not exactly results anyone would want to write home about but it is simply not fair to look at this club and determine where things currently stand by their record alone. One can easily lose sight as to why Tom was promoted to head coach. His main objective was to help bring along the Oilers plethora of young talent while trying to make the club more competitive. Though you could not tell as much by looking at their record, he has managed to accomplish just that.

Edmonton still may lose the majority of their games but when healthy, they can beat any team. In fact, if you look at the Oilers twenty-six wins this season, you see the following names among them:

After examining the numbers, you see that sixteen of their twenty-six victories have come against teams currently holding a playoff position and another six against clubs that are right on the doorstep of qualifying for the post season. Which means roughly 85% of the Oilers wins have come against either elite or very good competition. The fact that Edmonton can continually step up their play against the better teams in the league is a very good sign. Sure they struggle against lesser opponents but more often then not, that is due to a lack of maturity from such an inexperienced group. Once you take all of this into consideration,  saying that this group has not made progress would be inaccurate.

Without question, Tom's top priority coming in was to further develop the Oilers young players and for the most part, he has had outstanding results. Jordan Eberle is on the cusp of becoming a top ten goal scorer and points guy in only his second season. After suffering through some growing pains during his first two NHL campaigns, Taylor Hall has become an absolute force on a nightly basis and is on the verge of hitting the thirty goal mark at the age of twenty. Rookie centre Ryan Nugent-Hopkins still has a legitimate shot at winning the Calder Trophy and breaking the fifty point barrier before his nineteenth birthday, despite missing twenty games due to injury.. Defenceman Jeff Petry came into this year as nothing more then a bottom pairing guy to start that would hopefully take a step at some point during the season. Not only has Petry taken that step but one could easily make the argument that he has been the Oilers best defenceman over the last two months. That doesn't even take into account the rebound season that Sam Gagner has put together after a tough start and the exceptional strides that one Ladislav Smid has taken this year. Also, lets not forget that this team has the best power play in the league and a middle of the pack penalty kill. Those are two areas in which this club has regularly been near the bottom of the league in. Those are a lot of positives in what has been a pretty tough couple of years in the standings.

On the other hand, not every decision Tom has made has worked out well. The seemingly continual need to feed veterans Shawn Horcoff, Ryan Smyth and Eric Belanger ice time has boarded on insanity. While I understand and applaud the efforts that were made to shelter the kids at various times, at some point you have to throw caution to the wind. When your vets are unable to get the job done, you simply can not keep going back to them in situations that are doomed to fail in...especially when the youngsters are producing. Frankly, having a thirty-six year old Smyth among the top two players in ice time is asinine. He has never been a twenty minute a night guy at any point during his career so what made them think he could be at this stage of his career?  In recent years, it was clear to anyone paying attention that playing their captain absurd minutes effected him in a negative manner and yet they did it yet again this season. As for Belanger, the biggest issue stems from the fact that this coaching staff put him in offensive situations despite his inability to produce points. This is a player that has three goals on the season and is still used on occasion late in games when the Oilers are looking for an equalizer.

Don't get me wrong,  I am not implying that the kids should be playing twenty-three minutes a night because they should not. Having said that, there is no reason in the world for them to ever be among the bottom six skaters in ice time five-on-five, as they have been on more then a few occasions this year. These three are thoroughbreds and should be used in such a manner that is best suited to their skill set. On most nights, they are the best players on either bench but rarely if ever, are they used to dictate terms to the opposition and that is a major flaw in Renney and his staff's game plan.

As mentioned previously, the development of the young players has been a feather in this coaching staff's cap but there have been a couple misses along the way. Most notably,  Linus Omark and Magnus Paajarvi. Omark was never given a shot to start the season and promptly broke his ankle after being sent down to Oklahoma City. As for Paajarvi, much of the youngsters struggles were of his own doing but the coaching staff seemed almost unwilling to help him out of his early season funk.The mentality to consistently give Smyth and even Ryan Jones, top six minutes over the second year Swede seemed rather perplexing. It was one thing to play the hard working vets in front of Magnus when they were producing but it was something entirely different when they continued getting minutes despite struggling as much or even more then the the former tenth overall selection. Why Paajarvi was not given a shot in the top six sometime in December or January, when it was clear the two Ryan's had a hit a wall, only Renney and his crew could explain.

Those who feel that Edmonton's bench boss has done a poor job and should be dismissed at season's end, often overlook his biggest challenge...the Oilers roster. They are without question high on skill upfront but lack size within their top six and are nowhere good enough on the backend. While the goaltending has been inconsistent, with a half decent D the duo of Nikolai Khabbulin and Devan Dubnyk would have been good enough to compete for a playoff spot. As it currently stands that is not the case and that is no fault of the head coach. That one is on Steve Tambellini. Everyone knew that Edmonton's defence wasn't good enough coming into the season so expecting a smoke and mirrors routine to work over an 82 game schedule was poor management at its finest.

All things being equal, one would surely expect to see Tom Renney fired at the end of this season and the Oilers looking elsewhere for a new head coach. However things are not equal and when you consider the man date the veteran NHL coach had coming into this gig and the lack of player support that has been given to him by his general manager, it is not so cut in dry. I have been critical of Renney and his staff at various times but the more I think think things over, the more I am leaning towards wanting to see him back behind the bench. If he is willing to cut back the ice time given to his veteran players, which he has already started, and begin using his best players in all situations, then signing Tom to a one year contract extension would be the smart move. With the mass amount of player movement this organization has gone through in recent years and still more moves to come, a stabilizing presence behind the bench wouldn't be a bad idea. Allowing Tom Renney the opportunity to finish what he started, with what better be a much improved roster, seems like the most logical thing to do.
Posted by Oil Drop at 10:37:00 am