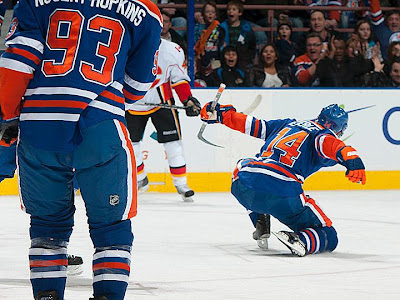 While the Edmonton Oilers may have dealt the Calgary Flames a big blow in their push to qualify for post season play with last night's 3-1 win, it was the Flames who delivered the big knockout blow on the evening. Jordan Eberle led the charge with three points and rookie Ryan Nugent-Hopkins scored twice in pacing the Oilers to their second consecutive win over their provincial rivals. Calgary defenceman Cory Sarich knocked star forward Taylor Hall out with a huge hit early in the first period and the Oilers youngster did not return.

It took only 1:18 of play before Sarich would end Hall's night with a devastating hit along the side boards, that briefly knocked the Oilers star winger out. While the Calgary D man clearly had one intention in mind, the fact that Hall slipped only moments before contact, made the outcome disastrous. While the hit was not dirty, it was sent with a purpose and Edmonton's lack of response to their star player being destroyed was disappointing, to say the least.

While Edmonton did nothing to make the Flames pay a price for the hit on the ice, they did make them pay on the scoreboard. After goaltender Devan Dubnyk made a huge pad save off Alex  Tanguay in the early going, the Oilers started to take over and jumped out to a two goal lead.

Nugent-Hopkins would open the scoring just past the midway mark, with his first on the night and seventeenth of the season past Calgary starter Leland Irving. Jordan Eberle found his rookie centre with a nifty little pass and the Nuge made no mistake snapping a quick shot past the stunned Flames netminder.

Just over five minutes later, Eberle would notch his thirty-first of the year on an absolute laser that left Irving shaking his head. After picking up Teemu Hartikainen's pass in the corner, the Flames inexplicably gave Eberle all sorts of time and space to walk out of the corner and a zing a wrist shot, under the bar, for the two goal cushion. Space, time and Eberle tends to result in a goal for the Oilers and this occasion was no different.

Early in the second period, Oiler defenceman Theo Peckham went looking for Mr.Sarich but the Flames blueliner wanted no part of answering for his big hit on Hall and unbelievably, Edmonton seemed alright with this. With Edmonton being where they are in the standings and the unimportance of the "two points" to them, the lack of a response against Sarich or another Flames player was truly shocking.

Just past the twelve minute mark, the visitors would finally get on the board when Mark Giordano's point shot deflected off the stick of Ladislav Smid and past the frozen Oiler netminder. The goal was the eighth of the season for the talented Flame rearguard and gave Calgary life in a game they had thoroughly been outplayed in but was there for the taking.

With Calgary in desperate need of the two points, one would have guessed they would have come out like gang busters in the third but it was the complete opposite. It was the Oilers who would dictate the tempo and allow the Flames all of two shots over the final twenty minutes of play.

RNH would put this one away, just before the ten minute mark, with his second on the night. The former Red Deer Rebel standout, slid a rebound past the Flame netminder for his eighteenth goal on the year and gives him forty-five points in fifty-one games. He now trails Gabriel Landeskog and Adam Henrique  by only one point in the Rookie Scoring race, despite playing twenty-two and twelve games fewer then his counterparts

Jordan Eberle picked up another assist on the play giving the talented winger a three point night and sixty-nine points on the season. The second year Oiler now sits tenth in league scoring and is in a four way tie for eighth among the league's top goal scorers with thirty-one.

Coach Tom Renney confirmed in his post game press conference that Hall had indeed suffered a concussion and would be out for the next while. He said they expect to have more info on Taylor's status sometime on Saturday but don't expect to see # 4 skating around in his jersey anytime soon.
Posted by Oil Drop at 10:52:00 am