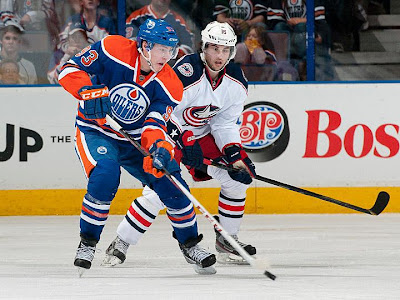 While the competition may not have been the stiffest they have faced of late, the Edmonton Oilers apparently took their head coach's message from two nights earlier to heart. They completely dominated the last place Columbus Blue Jackets in a rather workman like performance and won for only the second time in their last ten home games, by a score of 3-0. Devan Dubnyk had one of his easiest nights of the season, stopping all twenty-two shots he faced and centre Ryan Nugent-Hopkins led the charge upfront, with a goal and an assist. That gives the talented rookie forty-three points on the season and leaves him just three points shy of regaining the rookie scoring lead, despite missing twenty games due to injury.

Edmonton came out hard and dominated the opening twenty minutes but had little to show for it. Outside of a couple of botched opportunities by Ryan Jones, with a little help from the Rexall Place ice, all the Oilers got done in period one was to out shot the visitors to the tune of 12-2 and show their head coach that their heads were into this one from the get-go.

They would finally open the scoring at the 7:40 of period number two, courtesy of Nugent-Hopkins. Last year's first overall selection, took a quick feed off  the sideboards from Jordan Eberle and snapped a shot that beat Curtis Sanford low to the stick side to give the Oilers a 1-0 lead. That gives the youngster sixteen goals on the year and leaves him a realistic shot at reaching the twenty goal mark, with twelve games to go.

After doing little with two power play chances in the middle stanza, Edmonton was given a third shot on the man advantage with eleven seconds remaining in the period. It was more then enough time, as they needed only six seconds to make it a two goal lead. Taylor Hall knocked in a loose puck for his twenty-seventh on the year and thirteenth power play goal on the campaign. That moved Hall into a tie for third among power play goal leaders, only two behind Philadelphia Flyer Scott Hartnell and marked the fourth consecutive game the second year Oiler has scored.

The third period was fairly uneventful, as the Jackets could muster little on the attack despite holding a 9-3 advantage on the shot clock. Just past the midway point of period three, Dubnyk made a nice pad stop off Cam Atkinson to preserve the shutout but had little else to do in registering his fifteenth win of the season and second clean sheet of the year.

Edmonton would close out the scoring late in the frame, when Linus Omark notched his second of the season into an empty net, with just over a minute and a half remaining. Ryan Smyth created a turnover along the boards near the Columbus blueline, the puck squirted out to the talented Swede and with next to no room to maneuver, he flipped the biscuit towards the Jackets net and managed to bounce it past the defender and into the yawning cage.

Oil Notes: Winger Ben Eager missed the game due to back spasms and the club announced they had recalled winger Teemu Hartikainen to take the spot of the rugged winger. Hartikainen arrived late in the day and did take part in the pre-game skate but was left out of the Oilers starting lineup. With the Edmonton's next game coming Friday night against their provincial rivals, you can bet on the feisty Finn finding himself into the lineup against the Flames.
Posted by Oil Drop at 6:08:00 am