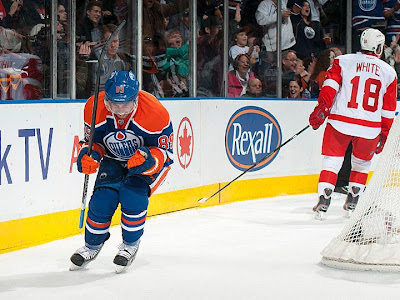 Since being selected sixth overall in the 2007 NHL entry draft, Sam has managed to put together five consecutive seasons of forty plus points. While those numbers are not staggering, they are decent...especially when you consider some of the linemates he has played with over the years in Edmonton. Unfortunately,  the biggest hurdle facing the still twenty-two year old centre, is something he has no control over...his size.

When the organization decided to take Ryan Nugent-Hopkins with the first overall selection in the 2011 draft, the writing was on the wall. If they had decided to go another route and went with a player like Gabriel Landeskog instead of Nugent-Hopkins, then Gagner stood a chance. As it currently sits, he has none. From an asset management side of  things, Edmonton would be wise to look at moving the highly skilled pivot, sooner rather then later.

This team desperately needs to insert some form of size and toughness into their top two lines and keeping Gagner around makes that next to impossible. If he were one of only a couple of forwards that were small in stature, there would not be an issue. Unfortunately for #89, the Oilers top six is littered with players like Jordan Eberle, Taylor Hall, Ales Hemsky and the Nuge. Add to that, the possibility of  Nail Yakupov being brought into the equation and the problem is obvious.

On far too many nights, the Edmonton Oilers best players are routinely being pushed around and it is something that needs to stop. Unless General Manager Steve Tambellini finally decides to bring in players that would allow his talented young stars to play their game, without fear of being pulverized, this team has little to no chance of moving up the standings. Regrettably, keeping Sam Gagner around would leave this club little hope in showing any sort of marked improvement in the standings.
Posted by Oil Drop at 10:56:00 am