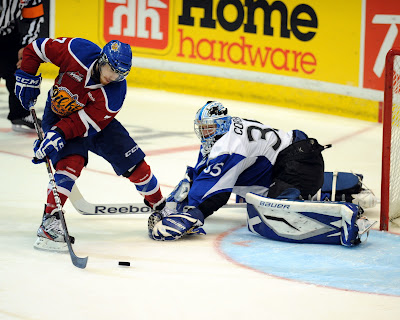 Things did not get off to a great start for the Oil Kings, as Brossoit allowed an awful goal in the opening minutes, giving Saint John the early lead they had hoped for. Phillips quick shot, from the corner, somehow eluded the Edmonton netminder and put the Sea Dogs out in front. Not exactly the start the WHL Playoff MVP was looking for.

Edmonton would get that one back at the 7:03 mark, thanks to a wonderful deflection by Kristians Pelss of a Mark Pysyk point shot. The goal came with the Sea Dogs down a man and left Mathieu Corbeil no chance in the Saint John net.

The Oil Kings would start period two on the power play but did nothing with the opportunity and it would come back to haunt them. Captain Jonathan Huberdeau did little in the Sea Dogs first game outside of taking six minutes in penalties but the Florida Panthers draft pick would make his first appearance of the Memorial Cup with just under five minutes gone in the middle frame. Charlie Coyle sprung the 2011 third overall selection for a breakaway at the Oil Kings blueline and the talented youngster went around Brossoit, as if he were pylon screwed into the ice.

With Saint John finally starting to look like the team everyone made the prohibited favourite heading in the 2012 Memorial Cup, they would stretch their lead to two thanks to another nice play from Coyle. The Sea Dogs leading scorer during the QMJHL playoffs carried the puck across the Edmonton line and sent a pass over to a streaking Danick Gauthier, that took a double deflection before sliding past a helpless Oil King netminder.

To Edmonton's credit, they did not fold their tent and scored just over a minute later to make it 3-2. Stephane Legault took a nifty little feed from Henrik Samuelsson and and easily shifted around an out of position Corbeil, before depositing the puck into the yawning Saint John cage.

It was all Seas Dogs to start the final frame but Brossoit was more then up to the task. The puck stopper had to raise his level of play in the third to keep his team in it and he did just that. Edmonton were buzzing the Saint John net midway through the period but were unable to get another by Corbeli.

Phillips would put this one away, snapping home his second of the night with 1:37 left on the clock and sealed the deal on the favourites first win of the tourney. Ryan Tesink closed out the scoring with an empty net goal to make the final 5-2.

Edmonton will have little time to feel sorry for themselves, as they get right back on the ice tomorrow night. They will finish off their portion of the round robin schedule against the OHL champion London Knights.