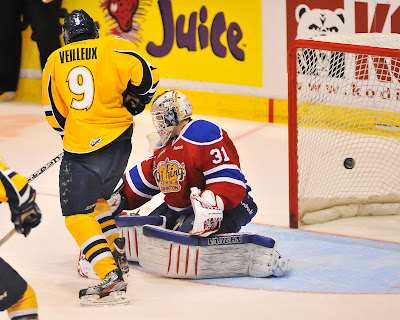 Cataractes blueliner Brandon Gormley led the way with a pair of assists and a +4 rating, while Michael Chaput picked up two more helpers, giving him the tournament scoring lead with eight points in four games. Edmonton forward Henrik Samuelsson scored the lone goal for the Oil Kings in the loss. The son of former NHL defenceman Ulf Samuelsson, was by far and away Edmonton's best player at the tournament, finishing with two goals and five points in the Oil Kings four games.

For the first time in four games, Edmonton came out of the gate with what looked to be some skating legs underneath them but it did not take long for things to start unraveling. Rhett Rachinski took a tripping minor a 1:15 in, that put the visitors behind the eight ball early but the Oil Kings looked solid killing off the Shawinigan man advantage. Unfortunately, that did little to deter the Cataractes.

Yannick Veilleux would deflect home Gormley's point shot, for his first of the tournament and leave the Oil Kings trailing early for the third straight game. They would make it a two goal cushion before the period was out, when defenceman Morgan Ellis ripped a short side power play marker that netminder Laurent Brossoit would like to have back. Keeping it to a one goal deficit after one was an absolute must for Edmonton but their playoff MVP was not up to the task.

Shawinigan wasted little time going for the jugular in the second, scoring twice in the opening three minutes and essentially ending the Oil Kings dream of a Memorial Cup Championship. Anton Zlobin would score is third of the tournament, blasting home a tidy little feed from Chaput past a surprised Brossoit. Obviously not the start Edmonton needed but it would only snowball from there.

Just over a minute later, Kirill Kabanov snapped a quick shot on Brossoit that the Edmonton puck stopper managed to deflected over the net. Unfortunately, the puck ricocheted off the glass and came back over the net and deflected off the startled netminders back, before accidentally pushing the puck into his own net. In what has been a dreadful tournament for the hard-luck Oil Kings goaltender, it seemed as though no matter what he did, he could not catch a break. That being said, his teammates did little to help pick up their struggling netminder.

Michaël Bournival would score another power play goal to make it 5-0 and then Pierre-Olivier Morin would put the final nail in the coffin, beating Brossoit for a shorthanded marker at 13:59. While it was another shot that Brossoit should have stopped, it was typical of the Oil Kings power play.

Another 0-4 performance with the man advantage, left Edmonton 1/18 for the tournament. As much as Edmonton struggled with their overall game throughout their four outings, it was the lack of production with the man advantage, that was the main reason for their early dismissal. In a setting like the Memorial Cup, special teams are usually the deciding factor and the Oil Kings were simply not good enough at either end of the rink.

There is little doubt that their 1-3 mark will leave a bitter taste in the mouths of both the players and head coach Dereck Laxdal but that should not be the case. While the Oil Kings were expected to compete for the Central Division crown, they more then exceeded those expectations. They not only won their division but took the Eastern Conference and were the top side in the entire WHL. Pretty heady stuff for a team that many felt were a year away from being able to compete with the big boys.

They headed into the playoffs on a 13 game winning steak and proceeded to win their first ten in the post season before finally dropping one to the Moose Jaw Warriors...in the third round. After eliminating the Warriors in five hard fought games, they faced off against the Portland Winterhawks in a thrilling seven game series for the Western Hockey League crown. As good as that battle was, it did leave Edmonton at a huge disadvantage heading into the Memorial Cup. As they were clearly the weariest of the four teams in this year's event.

With the win Shawinigan will now take on Saint John for the right to face the London Knights in the Championship Final on Sunday. The Cataractes and Sea Dogs are coming off a rather chippy affair on Wednesday evening that Saint John won by a score of 4-1 and featured a plethora of penalties and altercations between players and coaches.