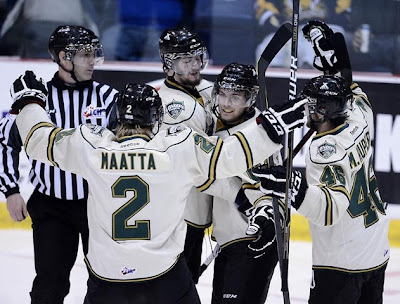 It appears as though the Edmonton Oil Kings magical season is on the verge of coming to an end. After falling 4 -1 to the London Knights on Tuesday evening, the Western Hockey League champions will need to beat all three of their opponents, in order to hoist the Memorial Cup Trophy after Sunday’s championship game. A tall task at the best of times but one that seems almost impossible for a team that has yet to find their stride at the 2012 Memorial Cup.


For the second straight night, the Oil Kings got off to a brutal start but this one was at a whole different level. First defenceman Griffin Reinhart made an ill advised drop pass that led directly to Ryan Rupert’s opening goal, all of 1:17 in. Things would only get worse from there, as captain Mark Pysyk continued his penalty taking ways,  as he was assessed a four minute minor for high sticking. The Knights were buzzing for the entire four minutes but were unable to get another one by Laurent Brossoit in the Oil Kings net.

Edmonton seemed to have weathered the storm but just over a minute after killing off Pysyk’s double minor, London would extend their lead.  Bo Harvat slipped a rebound past a down and out Brossoit, after making a great stop off a streaking Chris Tierney but no one picked up the trailing Harvat, who had a wide open cage to put the Knights up by a pair.

Eleven minutes in and it looked like men against boys. While London was flying all over the ice, Edmonton looked as though they were skating in mud. Luckily for the Oil Kings, two late penalties to the Knights gave the WHL champs a lengthy two-man advantage to get back into this one but they did with the opportunity. They held possession for much of the power play but had very little in the way of quality chances, thanks to an aggressive London penalty kill.

It looked as the two sides would head to the dressing room with the OHL champions holding a two goal lead but a great late pinch from Keegan Lowe, resulted in the Oil Kings cutting the lead to one with three seconds to go. A timely rush and pass from Henrik Samuelsson, found a wide open Lowe on Michael Houser’s doorstep, leaving the Knights goalie little chance of making the stop. After having the ice tilted badly towards their end for much of the period, Edmonton must have felt fortunate to be within striking distance.

After a torrid pace in the opening twenty, the play slowed down to a halt in the middle frame with the sides combining for three shots at the midway point of period two.  Just past the eleven minute mark, Edmonton’s  Travis Ewanyk nearly tied things, beating Houser but catching nothing but iron. Knights forward Max Domi picked up the loose puck and skated all the way into the Oil Kings zone and fired a quick shot that Brossoit sloppily directed towards the corner. Defenceman Ashton Sautner lost his check and allowed Greg McKegg to jump in and slide a shot underneath an out of position Brossoit. What could have easily been a 2-2 game was suddenly 3-1 London lead.

Edmonton was given a four minute power play late in the second, after Seth Griffith was whistled down for high sticking double minor. The chance to get back into the game was sitting right there but just like the two man advantage in the first, the Oil Kings did nothing.

Early in the third, they were given chance number six on the power play but again had nothing going. While the Knights did a great job blocking shots throughout the game, at some point you have to find a way to get shots through and actually attempting to shoo the puck would have been a good start. Going 0-6 with the man advantage will typically cost you a game and that is exactly what happened to Edmonton on this night.