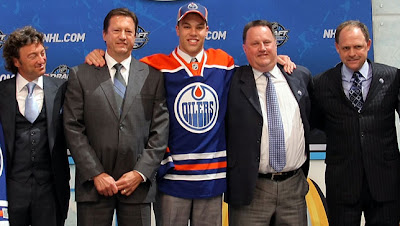 As good as a player like Murray could be, my feeling is the Oilers won't be calling the name of the Everett Silvertips blueliner. While he might be the most NHL  ready defenceman in the draft, long term they would probably be better off looking at Edmonton Oil Kings rearguard Griffin Reinhart or Moose Jaw Warriors defenceman Morgan Rielly. In my mind, the high end game those two could  potentially bring to the table, out weigh the steadiness a guy like Murray brings. That being said, I just can't see this organization calling out the name of a defenceman...if they make the first overall selection.

Many feel the Oilers are pretty much set up front with the likes of Jordan Eberele, Taylor Hall and Ryan Nugent-Hopkins but badly need an upgrade to their backend. While they are definitely missing that stud prospect on the blueline, they are not as paper thin as some make them out to be.

Edmonton already have some very good prospects in house. Oscar Klefbom, David Musil and Martin Marincin, as well as youngsters like Martin Gernat, Brandon Davidson and Dillon Simpson. Not to mention guys like Colten Teubert and Taylor Fedun. Will all those guys pan out? Nope but you would have to think at least three of them will turn out to be solid NHL defenceman and are any of the names available in this year's draft anything more than that? There does not appear to be a Drew Doughty or Alex Pietrangelo staring them in the face.

This club's current blueline needs a major overall but that won't be addressed by selecting a D man first overall. Would a player like Murray help as early as next season? Probably but his impact would be minimal at best. Whereas bringing in the right forward could prove to be helpful both today and tomorrow.

Edmonton's trio of current youngsters are impressive but to say this team is set up front is a bit of a stretch. Outside of the big three, they do not have any sure fire top six forwards in their system. While there are differing opinions on a guy like Sam Gagner, the way I see it, he is not a good fit in the Oilers top six because of their current makeup but would likely fill a second line centre role with another organization. They are facing the complete opposite scenario in their forward ranks, as they are on the blueline.

They seem to have a plethora of potential number three and four guys on the backend but are missing that clear cut top pairing stud. While in upfront, they have the three studs and a bunch of prospects that seem better suited for a bottom six role. Making the drafting of a player like Yakupov even more essential.

As is the case in nearly every year draft year, it seems the longer a player is rated highly in the rankings, the more holes people try to poke in their game come draft day. That has been the case with the Sarnia Sting winger for months but he has still managed to remain the consensus first overall pick.Should that not be enough? Are people just looking to find a problem for the sake of find one?

If for whatever reason Edmonton decide to not take Yakupov but keep the first overall selection, they would be wise to look at his Sarina teammate, Alex Galchenyuk, as option number two. The Oilers need to add that highly skilled fourth guy into the mix and Galchenyuk would be the next logical choice. While not as explosive as Yakupov, he would fill the need for top end centre they covet and still allow the organization to add another elite level talent.
Posted by Oil Drop at 10:21:00 am