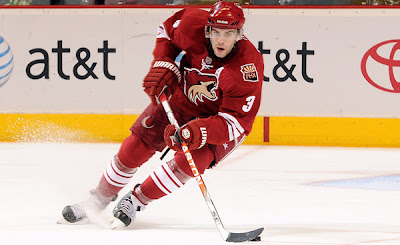 With the Coyotes already having the likes of Michalek, Rostislav Klesla, Derek Morris and stud Oliver Ekman-Larsson already in the fold and Memorial Cup standout Brandon Gormley waiting in the wings, the time would seem ideal for Phoenix to look at moving a rearguard. Add in the fact that Yandle earns a pretty penny at $5.25 million until 2015 - 2016, on a club that is seemingly always in financial difficulty, and that they are in desperate needs of adding some pieces upfront and the Oilers look like a perfect trading partner.

Outside of what has now become the big four, in Jordan Eberle, Taylor Hall, Ryan Nugent-Hopkins and Yakupov, nearly every other player, outside of  probably Oscar Klefbom, should be made available. Obviously, they would like to stay away from moving either Ladislav Smid or Jeff Petry, if at all possible, but in order to grab a player as good as the still twenty-five year old D man, they are going to have to part with some quality to get the job done. Spare parts won't do.

Phoenix will likely retain the services of captain Shane Doan but they are starting to look a little thin amongst their forwards. Would a guy like Ales Hemsky look good in the desert? Probably but his $5 million cap hit would not help the Coyotes from a money standpoint. Though he would definitely help from a skill set point of view. There's also the usual cast of characters like Sam Gagner, Magnus Paajarvi and possibly Anton Lander or Teemu Hartikainen that could be had for the right return. Not to mention draft picks, including picks in 2013 draft, which looks to be a highly regarded prospect pool.

Point is, the Oilers have the pieces in place to pull off this sort of move and it will come down to whether or not Steve Tambellini is willing to make the swap. He continually talks about how Edmonton have to upgrade their backend and here is a perfect opportunity to do just that. It is by no means an easy trade to make but one that has to seriously be considered, if the plan is to actually move forward and improve the club. The ball is in your court Steve, now do something with it.
Posted by Oil Drop at 7:48:00 am