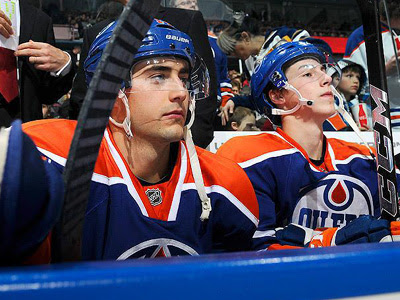 Eberle was coming off a season in which he led the Oilers in nearly every offensive category. His thirty-four goal, seventy-six point campaign left him in a tie for fifteenth in league scoring, while collecting only ten minutes in penalties on the year. Unfortunately, Campbell had a comeback season of sorts after being traded to the Panthers, putting up fifty-three points and taking only six minutes in penalties on the season.


As far as Nugent-Hopkins goes, it was no real surprise that Landeskog took home the Calder but the fact he did in such a landslide was rather shocking. The Avs youngster received 116 first place votes, compared to only 26 for RNH. Considering nearly everyone was in agreement that the Nuge would have made a mockery of the race, if he had not missed twenty games due to a shoulder injury, the margin of victory was ratehr startling. New Jersey Devils playoff hero Adam Henrique and Philadelphia's Matt Read rounded out the top four, of what was clearly a two horse race.