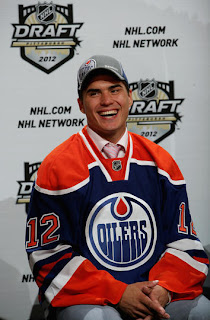 The consensus was this year's draft was heavy on defenceman and the fact that eight of the top ten picks were blueliners, clearly shows that was indeed the case. That being said, the two forwards that were selected should have been the Oilers top two choices. In Yakupov and Alex Galchenyuk, you  have two guys that could potentially become very special players. Rule of thumb is to always draft the best player and the two Sarnia teammates were just that.

Some feel the Oilers made a mistake in not taking a D man but it was the right decision to make. There is little doubt Murray will have a lengthy NHL career but the likelihood of him becoming a sure firer top pairing guy, is no guarantee. Some were viewing Murray as the safer pick but in reality, it was the Russian that seems to be the more likely to pan out.

At the very least, Yakupov should develop into a thirty goal man and that alone makes him the right choice. Offensive players do not grow on trees and while Edmonton does have a wealth of talent upfront in Jordan Eberle, Taylor Hall and Ryan Nugent-Hopkins, their depth of top six forwards within the organization wasn't great. That is no longer the case. With four elite level youngsters now in the mix, the Oilers are able to look at adding veteran pieces to help the kids along but not carry the line.

A perfect example was Philadelphia adding Jaromir Jagr to their roster last season. Was Jagr the same player he was in his prime? No but he was still good enough to contribute on the scoresheet, while helping Claude Giroux along in his development. It is a win win situation, if they acquire the right people.

Edmonton is looking to get back to the playoffs for the first time since their run to the Stanley Cup Finals in 2006. They are in the midst of a full out rebuild and have improved their talent level on a yearly basis but still remain nowhere near where they want to be. Hence why passing on a talent like Nail Yakupov was far to difficult for this organization to do and would have been the wrong decision. Make no mistake, the kids will ultimately be the straw that stirs this drink and adding Yakupov should make it that much sweeter for fans of the Edmonton Oilers.
Posted by Oil Drop at 1:33:00 am