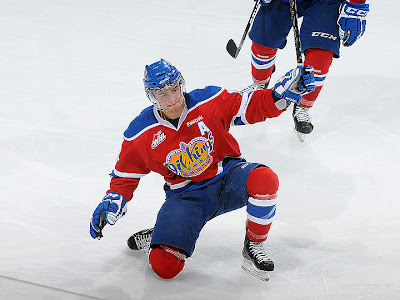 Edmonton headed into last night's action, as losers of  four of their last five home games and desperately needing to turn things around in their home rink. An early marker from Curtis Lazar, his sixth of the year, sent them on their way but Moose Jaw's Brayden Point evened things up before the midway point of period one, beating Tristan Jarry with a brilliant individual effort.

St. Croix would put the Oil Kings in front for good, with his first of three, ripping home a feed from Foster at the 12:12 mark and Edmonton on the power play. Travis Ewanyk would make it a two bulge, banging home his second of the year in the dying minutes of the opening stanza and putting a smile on the face of the 6,000 plus Oil Kings fans in attendance.

Edmonton continued to dominate on the man advantage in period two, as St. Croix would complete his hat-trick with two more power play markers and put this one to bed after forty minutes. The three point night moved the New York Rangers prospect into the top ten in WHL scoring and leaves him just one goal shy of reaching the century mark in an Oil Kings uniform.

The defending WHL champions are back in action on Saturday night,  as they host the Medicine Hat Tigers at Rexall Place and look to win back-to-back games for the first time since starting their 2012-2013 campaign with three consecutive wins.