If healthy, Oilers D could be far better than expected 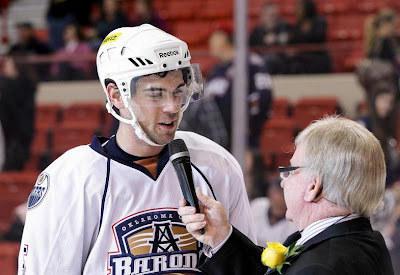 Heading into what was supposed to be the 2012-2013 National Hockey League season, there were more than a few questions surrounding the Edmonton Oilers blueline. Their lack of top end talent, depth, experience and possible health issues, were all a cause for major concern. While those questions still remain, the club's blueline mix doesn't look as questionable as it once did.

Obviously, the play of Justin Schultz down in Oklahoma City has changed  the overall look of the Oilers defence. While it would not be fair to expect the highly skilled blueliner to come into the NHL and dominate offensively as he has with the OKC Barons, the fact his game is already at the stage that it is, is a huge plus.

He has displayed the ability to play major minutes, which leaves the notion of using him in Edmonton's top two pairings, a legitimate one. By adding a puck moving defenceman, that can take a regular shift five-on-five and not be a liability, goes a long way towards fixing Edmonton's current talent and depth issues.

As promising as the addition of the former second round pick appears to be, the key to the Oilers current predicament, remains Ryan Whitney. If the former fifth overall selection of the Pittsburgh Penguin can stay healthy and play anywhere near the level he displayed during the 2010-2011 campaign, Edmonton could surprise more than a few teams.

Is it realistic for us to expect that level of play from Whitney? Probably not but if he can eliminate the defensive lapses that were far too frequent in his game during the 2011-2012 season, the rest should take care of itself. If Whitney continues to battle health issues, all bets are off. However, with the emergence of both Ladislav Smid and Jeff Petry and having a defenceman as good as Nick Schultz in the number five role, the demands on veteran puck mover will not be as great.

With the success of the Smid-Petry pairing, one would think, leaving that duo intact and playing Justin Schultz alongside Whitney, would be the likely scenario head coach Ralph Krueger would be leaning towards. The more intriguing and balanced pairings, would see Schultz team up with Smid and Petry partner up with Whitney.

Anyone that has had the opportunity to watch Schultz play in the AHL, will tell you this kid is an offensive threat and loves to jump into rush. Making the Czech blueliner, the logical choice as his even strength partner. He will undoubtedly need that security blanket in his own end and the only defencemen capable of playing that role, on this roster, would be Smid or Nick Schultz.

As far as the Petry-Whitney duo goes, it was  something many were hoping to see last season but the combination of Petry's early struggles and Whitney's injury issues, never saw the all American tandem materialize. With Petry taking such a huge step in his overall game, especially in his own end of the ice, now would be the perfect time and situation, to see what they duo could produce.

For the first team in ages, both pairings would have a right and left handed shooting defeneman but it would also give the coaching staff the versatility of inserting Nick Schultz into whatever role is needed, depending on the opposition. As a collective group, those five names look pretty good...at least on paper.

The number six spot is up for grabs but Theo Peckham would have to be considered the front-runner. The physical element he brings to the table is badly needed on the Oilers backend and he is frankly, one of their best penalty killers. Those two things, above anything else, should give him the upper-hand over Corey Potter. Some will argue he has far too many brain cramps when he has the puck on his stick, which would be 100% accurate, but in his defence, much of that was due to playing too many minutes.

Potter was a power play specialist but with Schultz coming to town, Whitney returning to health and Petry continuing to develop that side of his game, a regular spot does not seem to be in the cards for the twenty-eight year old AHL veteran. Same goes for Andy Sutton, who's off-season knee injury and surgery, may very well cost him the final year of his NHL career. A tough break for the classy veteran rearguard but he would have likely filled the number seven spot on the depth chart.

For the first time since 2006, the Edmonton Oilers blueline is starting to take shape. While not the deepest group in the National Hockey League, it looks nowhere near the mess it has been in recent years. If they can remain healthy and be the beneficiary of some solid netminding, be it from Devan Dubnyk and/or Nikolai Khabibulin, they will no longer be the liability that many expect them to be.

That is, if the NHL and NHLPA decide to come to their senses and actually get this season started.
Posted by Oil Drop at 8:47:00 am