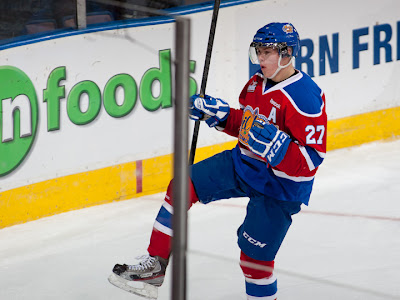 Curtis Lazar could not have picked a better time to snap his fourteen game goal drought, potting a pair and chipping in with a helper for good measure, as the Edmonton Oil Kings squeaked out a 4-3 win over the Lethbridge Hurricanes on Sunday afternoon.

Netminder Tristan Jarry made a rare second consecutive start and improved his record to 7-3 on the year, stopping nineteen shots on the afternoon.

As has been the case for much of the 2012-2013 season, Edmonton dictated the pace in the early going and jumped out to a two goal lead before the midway point of the opening frame. Lazar would finally break his extended goal-less skid, with a first period power play marker, beating Ty Rimmer for his ninth of the season.

They would extend their lead just over four minutes later, as Dylan Wruck hammered home his tenth after some hard work down low from captain Griffin Reinhart. The goal gives Wruck points in eight straight games, matching Henrik Samuelsson's latest hot stretch, that came to an end on Sunday afternoon.

The Oil Kings kept pouring it on in the middle frame, as the Latvian sensation would make it a three goal bulge. After causing a turnover deep in the Lethbridge zone, Lazar would find a streaking Edgars Kulda, who would make a gorgeous little move before beating Rimmer for his third of the season. It was a thing of beauty and one of the nicest goals scored at Rexall Place in sometime.

With this one looking to be all but over, the Hurricanes would mount a surprise comeback and get themselves back in this one. Back-to back penalties, to Reinhart and David Musil, would leave the Oil Kings two-men short and as good as their league leading penalty kill has been, it would finally break on this occasion.

Just over thirty seconds into the Musil minor, Graham Hood would finish a lovely three-way passing play to get the Hurricanes on the board. To the Oil Kings credit, they seemed to have stopped the bleeding there, as the visitors had to settle for a single goal from the two man advantage.

Another Edmonton penalty, this time to Brandon Baddock, would see Lethbridge pot their second power play marker of the period, thanks to Jaimen Yakubowski pouncing on a loose puck in front of Jarry. Suddenly the Canes had life and less than two minutes later, the comeback would be complete.

With the Oil Kings being handed a power play of their own, after their parade to the sin bin allowed Lethbridge back in it, but Yakubowski would get the best chance. The talented winger found himself in all alone on the Edmonton tender but was hooked by defenceman Cody Corbett, resulting in a penalty shot.

In what was a rather tough break for Jarry, the Oil King netminder actually stopped Yakubowski's attempt but the puck went into the air and bounced off the Edmonton netminder's back and across the goal line.

Three goals in under six minutes and just like that, the three goal cushion was erased and the crowd of just under 7,000 went dead silent.

To Edmonton's credit, they would waste little time in regaining the lead, as Lazar would rifle home off Reinhart's point shot, for his second power play goal on the afternoon and make it a 4-3 game.

Though the highly-touted B.C. native has had his fair share of struggles during the first half of the year, his three point performance gives him twenty points and ten goals on the year, still good enough for fifth in team scoring.

With the win, Edmonton now has a two point lead atop the WHL's Central Division but the Calgary Hitmen remain hot on their trail, with a game in hand. After taking all four points from a pair of weekend outings, the defending Western Hockey League champs are now off to Lethbridge, to face the Hurricanes on Wednesday night, as the two sides closeout their mini two game set.
Posted by Oil Drop at 6:35:00 am