Is having Nugent-Hopkins play for Canada the right move? 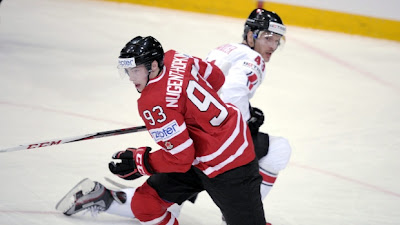 Hockey Canada made the mistake of leaving Edmonton Oilers centre Ryan Nugent-Hopkins off their roster at the 2011 World Juniors and it was a move that cost them dearly. Typically, you do not get the chance at a "re-do" in this sort of setting but they are getting just that, when it comes to the former first overall selection.

Obviously, the only reason Nugent-Hopkins has been made available is because of the current NHL Lockout but is it the right move for the player? It is clearly the right move for Canada but how does the former Red Deer Rebels standout really benefit?

Having a full National Hockey League season and twenty plus games in the American Hockey League under his belt, the Nuge is in a completely different situation. While his birth certificate he may say he is still eligible to play in this tournament, his experience says something else. Players always talk about having to make that "adjustment" to a new league and at this stage of the game, this will undoubtedly feel foreign to the B.C.native.

Around these parts, how often have we heard Jordan Eberle go on about how the jump from junior to the NHL was far easier, than his current situation in the AHL? Players get accustom to playing with guys who not only think the game a certain way but also play it a certain way. Which is something these kids are simply not ready to do.

Whereas, if he were to stay in Oklahoma City and continue to work on his game with the rest of his Edmonton Oilers teammates, that would not be case. Does it not seem like a step backwards, for a guy in his situation? Again, where is the benefit?

At the end of the day, the mind-set has to be what is best for Nugent-Hopkins and the Edmonton Oilers. Not what is best for Canada's Junior squad. They had that opportunity and decided to look elsewhere.

There will be those who think the Calder Trophy runner-up should simply step in and dominate at the yearly event...which he may very well end up doing. However, he might not. Chemistry generally plays a huge role in this sort of setting and it will be the Oilers talented centre who will have to adjust to his new surroundings and  teammates...not the other way around.
Posted by Oil Drop at 8:43:00 am