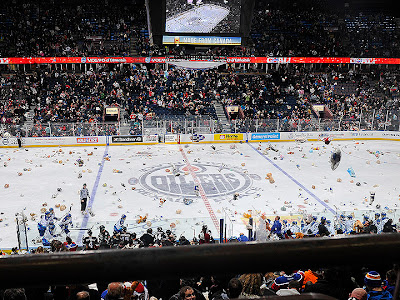 It was a tale of two games on Friday evening at Rexall Place. The Edmonton Oil Kings jumped out to an early lead, dominating the opening twelve minutes of action. Unfortunately for the season high crowd of 12,575, they witnessed the Calgary Hitmen score five unanswered goals, as they knocked off the Oil Kings for a fourth time this season.

Unlike last season's Teddy Bear Toss Night, which did not see a goal from the home side until the third period, the Oil Kings needed all of two minutes to hit the scoreboard in 2012. Edgars Kulda would pick up a loose puck and roof his fourth of the season, giving Edmonton the early advantage and allowing their fans the opportunity to shower the ice with over 10,000 teddy bears.

While the crew at Rexall Place did their best to coral the bears as quickly as possible, a lengthy delay could not be averted. The stoppage did not effect the Oil Kings whatsoever, as they peppered Hitmen's starter Chris Driedger with eleven of the games first twelve shots. Despite Driedger's best efforts, Edmonton would eventually extend their lead, courtesy of the suddenly red-hot Curtis Lazar.

After ending a fourteen game goalless drought with a pair against the Lethbridge Hurricanes on Sunday afternoon, the highly touted Lazar rifled home his fifth in the three games, burying a lovely feed from Stephane Legault for his thirteenth of the year.

To that point, it was all Edmonton but to Calgary's credit, they would bounce back quickly. Cody Sylvester hammered a rocket past a stunned Laurent Brossoit, less than thirty seconds after Lazar's power play marker, and from that point on it was all Calgary.

If not for a splendid pad stop from the Oil Kings tender, the Hitmen would have tied things up before the end of a wild opening twenty minutes. Edmonton may have had the lead on the scoreboard and shot clock but the visitors had all the momentum.

Calgary would continue to carry the play for much of the middle stanza but were unable to convert on numerous power play opportunities. However, they would find the equalizer with Edmonton on the man advantage, as Carson Samoridny finished off a three-on-one break, beating the Oil Kings netminder high to the glove side.

Meaning it would all come down to the final frame and just as they had in the two sides three previous meetings, the Hitmen found a way to get the job done. Neither side created much during the first half of the period but Calgary managed to pin Edmonton deep in their zone and seconds later, they would have their first lead of the night.

Zane Jones wired home his seventh of the season, over an outstretched Brossoit, to complete the comeback with just over eight minutes left in regulation. Jones, who had been effectively taken out of the play by Lazar only seconds earlier, managed to shake himself  free before sniping the go-ahead marker.

Five minutes later, he would bang home his second of the period, after Brossoit absolutely stoned Brooks Macek in tight but was in no position for the rebound. Just like that, it was a 4-2 Calgary lead and the Oil Kings faithful started heading for the exit.

With their netminder on the bench, Edmonton pressed forward to try and get back into it but all they could do was hit three goal posts, in a span of ten seconds. The Hitmen promptly moved the puck up ice and put the final nail in the coffin with an empty netter.

The come from behind victory leaves Calgary atop the Central Division, three points clear of their provincial rivals. The two sides do not have to wait long to renew acquaintances, as they complete their weekend home-and-home set on Saturday night, at the Scotiaplace Saddledome.
Posted by Oil Drop at 11:59:00 pm