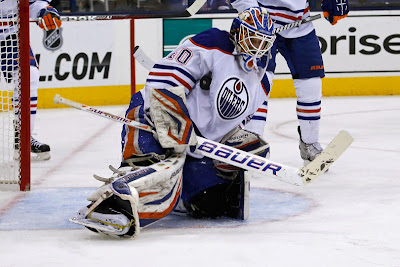 In the wake of the outstanding debut from backup netminder Nikolai Khabibulin on Saturday afternoon in Detroit, Devan Dubnyk continued to build on his stellar campaign with a standout thirty-nine save performance, leading the Edmonton Oilers to a 3-1 victory over the Columbus Blue Jackets. The win snapped Edmonton's five game losing skid, as they return home for what will be a crucial five game home stand.

Magnus Paajarvi scored the game winner late in the third period, firing home his first of the season, with just over three minutes to play and Ryan Smyth sitting in the sin bin for the third time on the night. It was a monster goal for the talented Swede but one that would have never happened, had it not been for the play of Dubnyk.

While Edmonton were undoubtedly tired, playing their second game in just over twenty-four hours, they were completely out-classed, by the last place Blue Jackets. This sort of performance does creep up on teams from time to time but not typically on one that is riding a five game losing streak and have had major problems creating any sort of offence at even strength.

Ralph Krueger's crew were not only out shot 40-14 but were badly out-worked and out-smarted over the final forty minutes of play. If not for a Herculean performance from the man that wears the #40 on his back, Edmonton would be starring at a six game losing streak, which had already included losses to the Colorado Avalanche and Dallas Stars.

Early on, it looked as though this could be the Oilers night, as a hard forecheck by Taylor Hall produced a turnover and a lucky bounce, leading directly to Ales Hemsky flipping home his fifth of the year over Sergei Bobrovsky and giving Edmonton a 1-0 lead heading into the first intermission.

However, from that point on it was all Columbus and the start of the Devan Dubnyk Show. The twenty-six year old netminder turned aside one barrage after another, as the Blue Jackets swarmed the Oilers for the duration of the middle frame. Dubnyk's best work came with Edmonton shorthanded, with a point blank stop off Jack Johnson being the best of the bunch.

As good as Dubnyk was, you knew it was just a matter of time before Jackets would draw level, which came midway through the third period, courtesy of a blast off the stick of RJ Umberger. It was an absolute dreadful piece of defending from Sam Gagner, which was compounded by a weak stick check from Hemsky, that allowed the big centre to circle along the boards and rip an absolute bullet past Dubnyk, for his first of the season.

Just like that, the lead was gone and Edmonton were on their heels, having not recorded a single shot on goal in well over twenty minutes

It looked to be going from bad to worse, when Smyth took his third minor penalty of the game and second straight in the offensive zone, too put the Oilers down  a man with under five minutes to go. Lucky for Smyth, Gagner would atone for his earlier blunder, breaking out on an odd man rush and setting up Paajarvi for the eventual game-winner.

Edmonton's leading scorer would put the final nail in the Blue Jackets coffin, sliding home his fourth of the year into an empty net, thanks to an unselfish and correct  play from Ryan Nugent-Hopkins. The slumping sophomore could have taken a crack at the empty cage, in search of his first of the campaign, but instead found Gagner for the easy tap in.

The Oilers head home from their quick two game trip with a 5-4-3 mark on the year and are about to open a critical five game home stand on Tuesday night against the Stars, before heading off on their ridiculous nine game/sixteen day road trip.

Edmonton will kick-off their journey on February 25th against the currently undefeated Chicago Blackhawks and follow that up with stops in Dallas, St.Louis, Minnesota, Columbus, Detroit, Nashville, Chicago for a second time and close out the trek on March 12th in Colorado.

Safe to say these next five games (Dallas, Colorado, Los Angeles, Minnesota, Phoenix) may very well make or break their season.
Posted by Oil Drop at 7:19:00 am