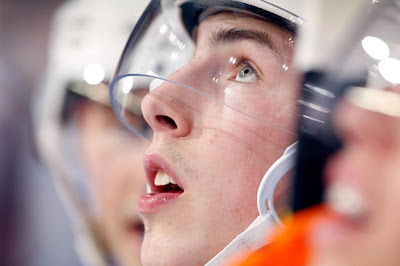 Edmonton Oilers centre Ryan Nugent-Hopkins silenced those who felt he wasn't ready for the NHL, with an outstanding performance during his rookie campaign. A quarter of the way through season number two, things have not gone as smoothly for the nineteen year old sophomore but he continues to contribute on nightly basis, despite his scoring wows.

Eleven games into his second season and Nugent-Hopkins has yet to find the back of the net and has just six assists on the season. The kid is clearly gripping his stick but continues to be the Oilers best two-way centre and one of their most important players.

With the club finally making the decision to limit Shawn Horcoff's minutes five-on-five, head coach Ralph Krueger handed  many of the captain's tough minutes to the former Red Deer Rebels standout. While it may not show up on the scoresheet, the youngster as shown dramatic improvements in almost every other aspect of his all around game.

RNH leads all forwards with an average ice-time of 21:02 a night, up nearly three and a half minutes from 2011-2012, and despite having registered just three points at even strength, the Nuge is sitting with a +2 rating for the year. Good enough for second on the club, just behind Taylor Hall's team-leading +3.

Add to that, the fact Nugent-Hopkins has easily been Edmonton most reliable centre in his own zone, including veterans Horcoff and Eric Belanger, and his slow start offensively doesn't look nearly as bad. He is next to never on the wrong side of the puck in the defensive end and very rarely, if ever, makes a bad decision with the puck in his own end of the ice.

Even in the dot, where he still has plenty of room to grow, he has taken a step forward...even with his a bum shoulder. After going 37.5% in the circle during his rookie campaign, Nuge has seen a noticeable increase to 41.9%, while leading the club with 167 trips to the face-off circle.

When coach  Krueger and his staff decided to handover first line duties to the Nugent-Hopkins line, they also had them take on the vast majority, if not all, of those so-called tough minutes. In all honesty, the more I think about it, the less surprised I am with that fact the young trio have not produced as much offensively.

Heading into the season, my biggest concern for this club was who would take on those minutes, if the club actually decided to use Horcoff in a third line role. Everyone willing to admit it, knew Gagner was not that guy. In my mind, the Nuge had already shown the ability of adding that dimension to his game but not at the tender age of nineteen and weighing all of one hundred and eighty, if that, pounds.

To my surprise, he has shown to be more than capable of taking on that role in the here and now but at least for the moment, it has come at the expense of him putting a few more points on the board. While he and his linemates have had troubles scoring with any sort of consistency, they are still creating far more chances than they are giving up.

While all three of Jordan Eberle, Hall and Nugent-Hopkins have taken huge steps forward in their overall games, they still need to learn to adjust to playing such demanding minutes, both physically and mentally. They are no longer getting all those cushy offensive zone starts but rather being asked to take on some of the NHL's very best in head-to-head combat.

When you actually sit and think about it, it is pretty impressive stuff. No question, these guys need to produce more in order for the Oilers to be successful but at the end of the day, what are we really talking about here?

As much as everyone has praised Gagner's play this season, Hall is right on his heels with eleven points in twelve games and has not even hit his stride yet. Heck, I had him down to score forty-nine points this season...which is basically the pace he is on at the quarter pole of the season.

While Eberle and the Nuge are little off that pace with eight and six points respectively, they are arguably one big game or decent run away from being back on track.

So yes, Ryan Nugent-Hopkins does need to rediscover his scoring touch in order for this club to turn the corner. Having said that, the former first overall selection has taken major strides forward in his game that should not go unnoticed and ones that will ultimately make the Edmonton Oilers a far better hockey club.
Posted by Oil Drop at 9:48:00 am