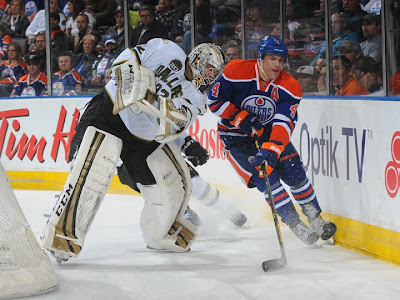 Sometimes sport just isn't fair. After walking out of Columbus with a 3-1 victory, in a game they frankly had no right even being in, the Hockey Gods decided to collect on the solid they did Ralph Krueger's crew just two nights early.

Despite being the better team for much of the night and playing their best all around game in ages, the Edmonton Oilers ran into a wall named Kari Lehtonen and a whole lot of bad luck, falling to the Dallas Stars for the second time in a week, this time by a score of 4-1.

The Stars netminder was simply outstanding in stopping thirty-five of the thirty-six shots fired his way, as Taylor Hall was the lone Oilers marksman on the night. His counterpart was far less busy at the other end of the rink, facing just twenty-four shots, but Devan Dubnyk had a couple of crazy bounces go against him and ultimately cost his team two points.

Edmonton caught a break of their own in the opening frame, as Lehtonen badly misplayed Hall's innocent looking wrist shot at the 12:59 mark, giving the Oilers a first period lead. While it was a rare break for the somewhat snake-bit forward, Hall was a force from the drop of the puck. He fired nine shots on goal and was by far and a way the best skater on either team.

The Oilers had three first period power play chances to try and extend their lead but continued to misfire on the man advantage. It was a blown opportunity that would come back to haunt them.

Dallas would get back on level terms, early in the middle stanza, courtesy of a Brenden Dillon point shot and the oddest bounce you will ever see on an NHL rink. Dillon's point shot was blocked by Lennart Petrell and somehow managed to deflect off the Oilers forward, to the side boards/glass and than ricochet across the ice, over the Oilers net and off the back of an unsuspecting Dubnyk, before dropping into the net.

To Edmonton's credit, they did not let the bad break get them down, as they continued to attack the Stars goal, firing sixteen second period shots on the Dallas netminder but were unable to beat the Finnish tender. The best of the bunch being a ridiculous pad stop off Jordan Eberle in the dying seconds of the period.

Despite being severely out shot and outplayed for much of the opening forty minutes, Dallas did have some Grade A chances but were stoned by Dubnyk at every turn. Unfortunately for the Oilers, it was another weird bounce that would give the Stars their first lead of the night...just forty-four seconds into the final frame.

It was another harmless looking point shot, this one coming off the stick of Eric Nystrom, that grazed off Ryan Nugent-Hopkins and off Dubnyk's mask, before hitting the back of the net. Just like that, Edmonton were trailing and facing the uphill battle of trying to get another puck behind a netminder that was clearly feeling it.

That goal would not come and an ill-advised neutral zone pass from Nail Yakupov, would lead to an insurance marker by you guessed it, Jaromir Jagr. The future Hall-of-Famer was a non-factor for much of the night but as usual,  Jagr needs just a single opportunity to do his damage and that is exactly what he did.

Ryan Garbutt would add insult to injury, beating Dubnyk on a partial breakaway, to make it a three goal bulge and send the Oilers to their sixth loss in their last seven outings. That being said, it was as complete a performance this team has had in sometime and yet they lost by three goals.
Posted by Oil Drop at 8:23:00 am