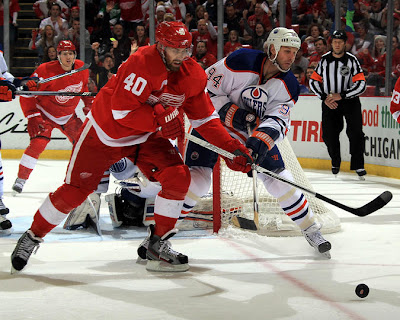 Exactly ten days ago, I wrote a piece focusing on the Edmonton Oilers having to make some tough decisions, in order to make room for Ryan Jones in their bottom six. With Jones inching closer to his return to the lineup and the recent emergence of Magnus Paajarvi over the last week and half, it looks as though the time for that decision has come sooner than expected and the odd man out looks to be Mr.Oiler himself, Ryan Smyth.

While Smyth was going to be in a dog fight for minutes upon the return of #28 to the lineup, the improved play of Paajarvi has almost put him in a no-win situation. Head coach Ralph Krueger decided to pull him from the lineup on Tuesday night against the Dallas Stars and as of right now, there should be absolutely no rush to get him back in.

The veteran winger certainly had a night to forget on Sunday in Columbus, taking three minor penalties, but his exclusion from the lineup has less to do with those penalties and more to do with his overall play. Once the Oilers lost Shawn Horcoff and Eric Belanger to injury, do you think it is was a coincidence that they turned to Smyth to play in the middle over say Lennart Petrell?

Sure, he had taken a few twirls at centre earlier in his career but Petrell has played centre for much of his career over in Europe. The reason the move was made is obvious to anyone willing to pay attention. The rugged Finn was playing far too well to be moved, forcing Krueger to use the organization's sixth all-time leading scorer out of position.

Unfortunately for Smytty, he is not a centre and Sunday night was the final straw. A move had to be made. Up came Chris VandeVelde and to the press box went #94. While Smyth and his large group of fans were unhappy with the move, it was frankly the only decision the Oilers new bench boss could make.

Paajarvi and Petrell have both moved past him on Edmonton's depth chart at even strength and on the penalty kill and the talented Swede has taken his spot on the second unit power play, in what has been a complete role reversal from last season.

While former head coach Tom Renney used the Horcoff-Smyth tandem as his go to pair on the PK during the 2011-2012 season, let's be honest here. The Oilers four most effect penalty killers last season were Horcoff, Jones, Belanger and Petrell. Nothing has really changed on that front, even with Jones not having played a single game, other than Paajarvi adding his name into the mix.

Leaving Teemu Hartikainen or Ben Eager as the only other possible options to come out of the lineup, in favour of Smyth. However on a team that has next to no size upfront, there is no way on earth either one will be coming out.

Hartikainen started the season on a line with Smyth and Horcoff but since being re-united with Paajarvi, the two youngsters have become far more effective and consistent. Also, don't forget the the big Finn is currently on the top power play unit, with their captain out of action, and had claimed Smyth's spot on the second unit well before Horcoff was hit by the injury bug.

Having just returned from injury and being the only forward on this roster with any sort of toughness, Eager is as close to being a lock as any of the aforementioned names. If the former first round pick remains engaged and willing to use his size and speed to his advantage, one could argue using him as a regular in the top nine.

Leaving Smyth as the extra forward or fourth line centre, until Horcoff returns from his broken knuckle. It is obvious he is not the answer down the middle and as painful as it might be for the vast majority in Oil Country to accept, he is not the answer on the wing either...and Jones has even returned to the lineup.

Obviously, for a guy that has bled Orange and Blue as long as Ryan Smyth has, his current predicament can't be an easy one to stomach. In my mind, re-signing Smyth was not a smart or necessary move and have said as much since last February. That being said, from a loyalty stand point. I get it. I don't agree with it but I understand why the offer was made.

With the eighteen year NHL veteran on the verge of turning thirty-seven years old and his days as a top flight player nothing more than a distant memory, Ryan has to accept his role for what it is or look to go in another direction.

Be that with a different organization or seriously consider walking away from the game he so dearly loves. Definitely not any easy decision to make but one only he can make.
Posted by Oil Drop at 7:54:00 am