Horcoff remains a critical piece to the Oilers lineup 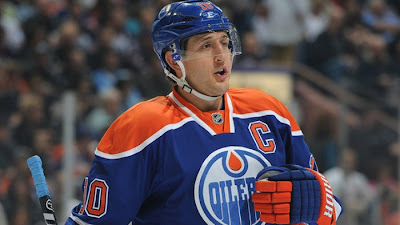 He may only have one goal and one assist on the season but much of the Edmonton Oilers recent struggles seem to coincide with the absence of one Shawn Horcoff from their lineup. Before being knocked out of action by the Phoenix Coyotes Shane Doan, the Oilers were 4-2 on the year. Since than, Edmonton has gone 2-5-2-1 and have plummeted down the Western Conference standings.

The large majority of fans in Oil Country have taken to their captain as their personal whipping boy, partially due to his lack of performance but mostly because of his annual pay cheque. You would be hard pressed to find anyone that would argue Horcoff isn't badly overpaid at $5.5 million but he certainly still fills a massive role and need in Ralph Krueger's lineup.

While the veteran centre has been asked to do far too much over the last number of seasons, he was finally placed into the third line role, that best fits his skill set. After playing nearly twenty minutes a night, for what seems to have been an eternity, Horcoff finally saw his minutes cut to just over fifteen minutes by the Oilers new bench boss.

Through seven plus games, the former seventy point man looked to be rounding into form and growing more and more comfortable in his new role. Unfortunately, that's when the injury bug hit and Edmonton haven't been the same team since.

After missing the final two games of the Oilers road trip in late January/early February, Horcoff returned to lineup on February 4th against the Vancouver Canucks but lasted just two periods before breaking his knuckle. Not surprisingly, Edmonton were in front when he was forced to leave the game but ultimately found a way to lose to the Canucks in overtime.

While Horcoff's absence has unquestionably been felt in both the faceoff circle and at even strength, the area that seems to have been hit hardest has been the power play. The Oilers have played ten games since their veteran centre was forced to sit out against the San Jose Sharks on January 31st. Heading into that matchup, the Oilers were a top three power play in the league, along with the Sharks and New York Islanders.

They were hovering in and around the 30% range on the man advantage. Now maintaining that number over the course of any season, abbreviated or not, is unrealistic. However, in the following nine plus games(including the final twenty-five minutes against Vancouver) the Oilers power play has scored just five times on forty attempts. Which works out to a staggering 12.5% over that stretch.

Now is that lack of production strictly due to the absence of Horcoff on the man advantage? No but it certainly has played a huge part. The most glaring issue being in the faceoff dot, where instead of gaining instant possession in the opponents end, the Oilers have been forced to fetch the puck from Devan Dubnyk or Nikolai Khabibulin on far too many occasions. Add to that, their recent struggles in regaining possession in the opposition's zone and the sharp decline in their PP numbers are suddenly not so shocking.

The second area of concern, is the lack of a legitimate net presence and puck retriever, aspects which Horcoff brings to the Oilers top power play unit. While the likes of Teemu Hartikainen and Ryan Smyth having also seen time in a similar role, neither have been able to reproduce what # 10 has managed to bring to the table on a consistent basis..

While the power play has remained in the league's top ten, currently sitting seventh, it is the lack of those extra five or so goals that have likely cost Edmonton anywhere from 5-10 points in the standings. For a team that has struggled to score as much as the Oilers have at even strength, a league worst fifteen times, that extra goal is usually the difference between taking home that extra point or any points at all.

Even if you were to go on the lower side of things and add five points to their current point total of fifteen, that would place them in a tie with the St. Louis Blues for fifth spot in the West. Instead, the sit in a tie for twelfth with the Avalanche and are just three points out of the basement.

Is that all on Horcoff being out of the Oilers lineup? No but it has played a major role in their recent downfall. While the thirty-four year old may be the fans favourite whipping boy, he most certainly remains a crucial part to this club's potential success.

Which is something fans should keep in mind the next time they try to belittle the importance of Shawn Horcoff. What he does may not be worth $5.5 million but to the current day Edmonton Oilers, he has almost become irreplaceable.
Posted by Oil Drop at 10:35:00 am