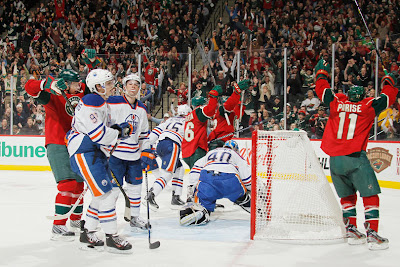 In what was as important a game as they have played during the 2013 season, the Edmonton Oilers delivered arguably their most disappointing performance to date, falling 4-2 to the Minnesota Wild on Sunday evening. Netminder Devan Dubnyk made thirty-nine stops in the losing effort, as the Wild outshot their Northwest rivals two-to-one on the night.

Magnus Paajarvi was the lone bright spot for the visitors, scoring his third of the season and being by far and away the best Oilers skater on the night. It was a game in which Edmonton desperately missed Taylor Hall, who was sidelined with a hamstring injury.

Despite being without their best player, these were two points the Oilers simply had to have and were frankly there for the taking. After easning three of a possible four points on the first two games of their season-high nine game road swing, Edmonton have now lost back-to-back outings in St, Louis and Minnesota.

While Ralph Krueger was hoping to see his side jump out to a quick start, it was the Wild who would grab the early lead. Jared Spurgeon's seeing-eye point shot found it's way through traffic and past Dubnyk, all of two and half minutes in. To The Oilers credit, they would fight back with with a late equalizer, courtesy of a great effort from Paajarvi.

The talented Swede took a pass from Jordan Eberle deep inside the Wild end, before taking the puck hard to the net on a nifty little wrap around, beating Niklas Backstrom. It was not only a huge call for the third year Oilers forward but also one that brought Edmonton level, heading into the intermission.

One would think the late goal would have given the Oilers momentum heading into the middle frame...not so much. Minnesota took the play to the Oilers throughout, outshooting them by an 18-0 margin. That is correct, Edmonton went the entire second period without registering a single shot on goal.

Thanks to some lucky bounces and a solid period from Dubnyk, the Oilers and Wild were still deadlocked in a 1-1 game, with twenty minutes left to play. The shot clock may have read 29-7 but scoreboard told a different story. The game was there for taking...or so it seemed.

Mikko Koivu would score nine seconds into period three, striping Ryan Nugent-Hopkins just inside the blueline, before beating the stunned Oilers netminder with a quick wrist shot. A tough break for both Nugent-Hopkins and Dubnyk but one that would prove rather costly.

Exactly six minutes later, Minnesota would extend their lead to a 3-1, as a Charlie Coyle backhand beat Dubnyk on the shortside, on a shot the Oilers starter would love to have back. After keeping his team in the game during the onslaught that was the second period, that wasn't the case over the final twenty minutes.

Edmonton would catch a huge break at the 12::56 mark, as Koivu's clearance attempt ricocheted off Sam Gagner, who was behind the Wild net, to the front of the net and proceed to bounce off Ryan Suter and into the back of the Minnesota goal. You would be hard-pressed to find an weirder goal but not surprisingly, the Oilers #89 was in the middle of it. As nearly everything the twenty-three year old has touched this season, has turned into points.

Unfortunately for Edmonton, Jeff Petry would take an ill timed goalie interference penalty, less than minute later, that would put this one to bed. Dany Heatley would tip home his eighth of the campaign, redirecting Koivu's point shot by Dubnyk, to restore the Wild's two goal cushion and put the final nail in the Oilers coffin.
Posted by Oil Drop at 7:23:00 am