Smid - Schultz pairing could be just what the Oilers need 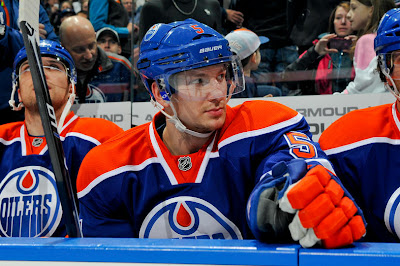 Heading into the 2013 campaign, the Edmonton Oilers plan was to have rookie blueliner Justin Schultz play alongside veteran Nick Schultz. While early results were very positive, not surprisingly, the pair have struggled in recent weeks.

With the duo being asked to play top pairing minutes on most nights, it would seem a little far fetched to expect no bumps along the way. Many felt the organization would "ease" Justin Schultz into his first NHL season by using him in a #4-#6 role at even strength. Unfortunately, with the Oilers blueline lacking a true top pairing guy, it has been the complete opposite scenario for the former second round pick.

Schultz currently leads Edmonton in average ice-time at 22:50 and has already become the club's top D man. With that being the case, Nick Schultz has seen himself averaging 19:22 minutes a night and with all due respect to the Sr. Schultz, he is a #4/5 defenceman at this stage of his career. Yet he has averaged more ice time than Ladislav Smid through the first twenty-two games.

While the pairing of Smid and Jeff Petry were solid during the latter half of the 2011-2012 season, they have had their fair share of ups and downs during the current campaign. In my mind, Smid was the guy that made the most sense to play alongside Schultz from the get-go but more than understand why head coach Ralph Krueger went the way he did.

That being said, the time has come to make the swap and play the club's best offensive blueliner with their best defensive D-man. This roster may not currently have a true top paring guy on it but the two that come the closest are Smid and Justin Schultz.

In a perfect world, having Petry lineup beside a healthy and confident Ryan Whitney would be best but unfortunately that is not a real option. Though having the Oilers former 45th overall selection playing with a combination of Nick Schultz and Whitney, might not be such a bad idea. It would not only lighten the load on the thirty year old Schultz but perhaps give Whitney a shot at showing he can still contribute in a top four role.

As far as the two former Anaheim Ducks prospects go, they have the makings of what could turn into a solid pairing. Having the hard-hitting Czech as his security blanket, should allow Schultz to be a little more adventurous when jumping into the play. Unless you haven't been paying attention, the former University of Wisconsin standout has rarely joined the rush over the last ten to fifteen games.

Adding a reliable stay-at-home defenceman like Smid, should help Schultz at both ends of the ice. It would definitely free him up to jump into the play more frequently but it would also allow him to simplify his game in his own end. Playing with a far more physically engaging partner, should make learning the ropes in his own zone, should make it a whole lot easier on the Oilers #19.

Is it a perfect tandem? Probably not, as Smid is likely best suited in a second pairing role and Schultz is not ready to carry an NHL defence on his shoulders at the age of twenty-two. However at the moment, it is easily the Oilers best option. In all honesty, it is no different than Tom Renney deciding to run with the duo of Smid and Tom Gilbert as his go to pair during the early part of the 2011-2012 campaign.

Was that a true top pairing? Not at all but it was easily the best option Renney had at his disposal. Not unlike what Ralph Krueger is currently facing with this year's edition of the Edmonton Oilers. If nothing else, how is it not at least worth a look?
Posted by Oil Drop at 10:11:00 am